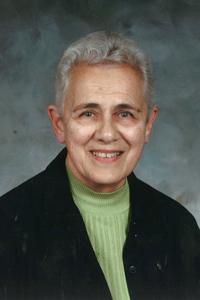 MRS. ELEANOR MARGARET DORIGATTI of Lethbridge, beloved wife of the late Mr. Lloyd Dorigatti, passed away peacefully on Wednesday, January 23, 2013 at the age of 85 years.
Eleanor was born and raised in Lethbridge where she met and married the love of her life, Lloyd, and together they continued to reside until his passing in 2010. She worked for AGT and was very proud of working there and being an AGT Pioneer. After retirement she kept in touch with many co-workers at monthly lunches. Eleanor was an avid bowler, traveling to many tournaments with Lloyd. She was a kind and generous spirit, supporting many charitable organizations. Her strong faith served her well over the years, which carried her until the end.
She is survived by her brother-in-law Fred Dorigatti, sister-in-law Patricia Maryancik, extended family, many nieces and nephews who she cared for and they cared for her as well.
Besides her beloved husband Lloyd, Eleanor was predeceased by her parents Mary and Steve Maryancik and brother John “Budd” Maryancik.
Vigil Rites (Prayer) will be held at 7:00 pm, on Monday, January 28, 2013 at MARTIN BROTHERS RIVERVIEW CHAPEL, 610 – 4 Street South, Lethbridge led by Maureen Condon Horon.
A Memorial Mass will be celebrated at 11:00 am, on Tuesday, January 29, 2013 at ST. BASIL’S ROMAN CATHOLIC CHURCH, 604 – 13 Street North, Lethbridge with Father Kevin Tumback celebrant.
In lieu of flowers, memorial donations may be made to All Saints Parish, 2405 – 12 Ave South, Lethbridge, AB T1K 0P4.
Send condolences at www.mbfunerals.com.
Martin Bros. Funeral Chapels Ltd.
610 – 4 Street South
Lethbridge, AB T1J 4P3
Phone: (403)328-2361 Fax: (403)382-3623
Toll Free: 1-800-382-2901
www.mbfunerals.com