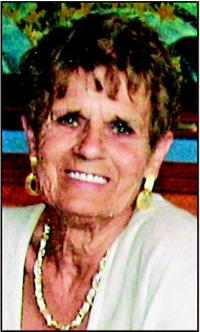 1936 – 2013
It is with extreme sadness that we announce the passing of our mother Marg
MacMurchy, beloved wife of the late Donald “Bud” MacMurchy, on Tuesday,
January 22, 2013 at the age of 76 years.
A private family funeral service was held at the Southland Funeral Chapel.
Condolences may be forwarded by visiting our website at
www.southlandfuneral.com.
Marg is survived by her children Jill (Dave) Jespersen of Taber and their
children Brody (Jodie) Jespersen (great grandson Judah Jespersen) and Jori
Jespersen; Bruce (Janine) MacMurchy of Taber and their children Kristin
(Ashley) Skiba (great grandchildren Walker and Maizie Skiba) and Kevin
MacMurchy (Kelsey and her son Kellon); Kim (Ronnie) Thibodeau of Cranford
and their children Tenille (Wade) Miller and Logan Thibodeau (Tasha). She is
also survived by her brothers Peter (Mary) Braun, John (Sandra) Braun, Brian
(Trish) Braun and Bill (Cynette) Braun; sisters Anne (Joe) Megyes, Helen
(Joe) Shield, Brenda (Jim) Gunn, Viola (Don) Powell and by many nieces and
nephews.
She was predeceased by her husband of fifty six years Bud MacMurchy,
parents Peter and Margaret Braun, two brothers, two sisters, one
sister-in-law and one brother-in-law.
Marg was born December 13, 1936 in Hague, Saskatchewan and moved to Taber
with her family in 1947. She met Bud MacMurchy and they were married
November 12, 1954. In 1956 they moved to Crossfield and in 1964 returned to
Taber where she raised her family before working for the Taber School
Division.
Marg enjoyed golf, curling and she loved to shop! She took pride in her
spotlessly clean home, her sewing, cooking and baking. She enjoyed
travelling to Arizona, Las Vegas, Mexico and Hawaii. Her children,
grandchildren and great grandchildren were the greatest joys in her life.
Marg will be sadly missed but fondly remembered by her family and dear
friends.
If friends so desire, memorial tributes in Marg’s name may be made directly
to STARS, 1441 Aviation Park NE, PO Box 570, Calgary, Alberta T2E 8M7
(www.stars.ca).
Arrangements in care of Southland Funeral Chapel, Taber. Telephone: (403)
223-8778.