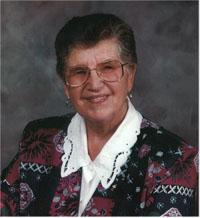 MARY LAZAR, beloved wife of the late Frank Lazar, passed away peacefully at the age of 82 on Saturday, January 26th, 2013 at the Chinook Regional Hospital.
Mary is the loving mother of two children; son Louis (Garbine) and daughter Amanda, and daughter Karen (Brian) Tricsli.
She is also survived by her sister Veronica (John) Hakstol, and brother Frank (Rose) Sitter, as well as numerous nieces and nephews.
Mary is predeceased by her husband Frank, parents Frank and Katherina Sitter, and twin sisters that died at infancy.
Mary was born in Croatia in 1930, and came to Canada with her family in 1949.
She spent many years of her earlier life in Edmonton where she married her husband Frank and raised her family. They operated a drywall business.
In 1970 they moved to Purple Springs. She loved gardening and was very proud of the flowers she grew. Mary was always involved in working with their cows and calves, was an active member in her church and was a long time member of the C.W.L.
In 1996 they retired and bought a home in Lethbridge where she continued with her hobbies in a more relaxed way. When Frank passed away in 1997 she moved to Martha’s House and lived there for many years. When her health began to fail she lived her final years at St. Therese Villa.
A Prayer Vigil will be held at CORNERSTONE FUNERAL HOME – 2800 Mayor Magrath Drive South, Lethbridge, AB on Tuesday, January 29, 2013 at 7:00 P.M. With Deacon Cliff Bogdan Officiating.
A Funeral Mass will be celebrated at OUR LADY OF THE ASSUMPTION CATHOLIC CHURCH – 2405 – 12 Avenue South, Lethbridge, AB on Wednesday, January 30, 2013 at 10:00 A.M. with Father Kevin Tumback Celebrant.
Honoured to Serve
Cornerstone Funeral Home & Crematorium
2800 Mayor Magrath Drive South
Lethbridge, Alberta T1K 7B1
Telephone ~ (403) 381-7777
Fax ~ (403) 381-3128
Toll Free ~ 1-(888)-381-7778
care@cornerstonefh.ca