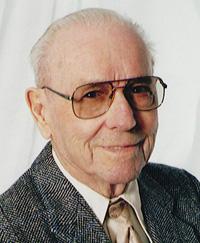 Irvine Otto Sorge, beloved husband of the late Lois Sorge (Topp) passed away peacefully at the Pincher Creek Hospital on Saturday, January 26, 2013.
Irvine was on born on June 24, 1922 to Leila and Otto Sorge. Irvine and his two sisters and brother spent their youth on the family farm just south of Pincher Creek. Irvine attended the Crook School for nine years and spent the next year at the school in the town of Pincher Creek. Irvine much preferred farming over school, so for the next 4 years you could find him tending cattle in the back “40” and being the general farmhand during the busy summer months.
Irvine enlisted in the Air Force in June of 1942 and spent the next 3 years at various air force bases in the Maritimes. On his return, Irvine rekindled his romance with Lois Topp, whom he had met prior to leaving for the Maritimes and on July 27, 1946 they eloped to Waterton Lakes National Park and were married in the Lutheran church.
They spent their first 3 years working at the Castle saw mill and then settled back in Pincher Creek where they remained for the rest of their lives.
Irvine was a “jack of all trades” and worked at a variety of occupations from farmer, steam engineer, derrick hand, owner of Esso bulk station and guard/warehouse personnel at the Shell Plant. Before retiring, Irvine and Lois purchased the Dixon’s Coffee business and ran it for seven years. Irvine was the ultimate handy man and his grandkids always said “Grandpa can fix anything”!
Irvine was an avid hunter and fisherman and his family enjoyed the many catches of the day. He was an avid card player and had held various positions within the Lion’s club organization.
Irvine is survived by his son Tom (Brenda) Sorge; daughter Shari (Leon) Barendregt; his grandchildren Loa (Brad) Manning; Chase (Paige Hierath) Barendregt; Cayle (Colleen) Sorge; Devon and Erin Sorge and his sister Ina Schiffner.
A Memorial Service will be held at 2:00 P.M., on Friday, February 1, 2013 at PINCHER CREEK UNITED CHURCH, 972 Police Ave., Pincher Creek, AB, with Brent Woodard Officiating.
Memorial Donations may be made in Irvine’s memory to the Good Samaritan’s Society Vista Village, P.O. Box 1510, Pincher Creek, AB, T0K 1W0
Eden’s Funeral Home and Crematorium
966 Elm Street
Pincher Creek, AB
Phone: 403-627-3131
Email: condolences@edensfuneralhome.com
www.edensfuneralhome.com