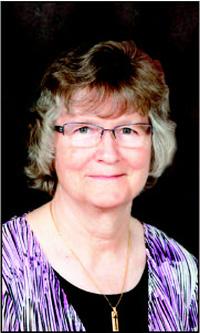 1943 – 2013
Maria Oevering, beloved wife of Jelle “Charlie” Oevering, passed away in
Taber on Sunday, February 3, 2013 at the age of 70 years.
Relatives and friends are invited to Prayers at the Southland Funeral
Chapel, 5006 – 48 Avenue, Taber on Friday, February 8, 2013 at 7:00 P.M.
The Funeral Mass will be celebrated at St. Augustine’s Catholic Church,
5009 – 48 Avenue, Taber on Saturday, February 9, 2013 at 11:30 A.M with
Reverend Vincent TuanHa Celebrant. Burial to follow at the Taber Memorial
Garden. Condolences may be forwarded by visiting our website at
www.southlandfuneral.com.
Besides her loving husband Charlie, Maria is survived by her brother Frank
(Danica) Hrup of Slovenia, sister Julie Hrup of Medicine Hat, nephew Joe
Hrup (Lara Huget) of Calgary, nephew Brandon (Kirsten) Hrup of Okotoks and
numerous nieces, nephews and cousins in Slovenia. She is also survived by
Charlie’s family, Peter (Nell) Oevering of Calgary, Gerald (Tina) Oevering
of Vauxhall, Richard Oevering of Taber, Mike Oevering of Lethbridge and
numerous nieces and nephews in the Oevering families.
Maria was predeceased by her parents, Charlie’s parents, two brothers and
two brothers-in-law.
Maria was born in Slovenia January 18, 1943. In 1964 she immigrated to
Canada and lived in Toronto to be near her oldest brother Joe. Several years
later she moved to Brooks where she met Charlie, the love of her life. They
were married in 1981 and moved to Taber in 1997. They were happily married
until she lost her lengthy battle with cancer.
Maria worked several years for the Brooks School District until her
retirement. She loved her church life and her friends were very important to
her but above all she cherished her family. She enjoyed gardening, swimming,
camping and playing tile rummy.
If friends so desire, memorial tributes in Maria’s name may be made
directly to the Taber and District Hospital Foundation, 4326 – 50 Avenue,
Taber, Alberta T1G 1N9.
The family would like to give special thanks to the doctors and nurses at
the Taber Hospital for their compassion and care. Her warm embraces and the
love she extended to all will be deeply missed.
Arrangements in care of Southland Funeral Chapel, Taber. Telephone: (403)
223-8778.

No Condolences for “OEVERING Maria”