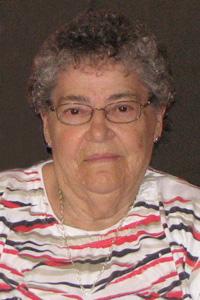 ALICE MARIE RARICK of New Dayton, Alberta beloved wife of the late Mr. Leo Rarick, passed away on Thursday, January 31, 2013 at the age of 80 years.
Alice was born March 26, 1932 in Bow Island, Alberta where she grew up and received her early education in Hoping and went on to high school in Foremost. On March 17, 1949 she married the love of her life, Leo Rarick. Together they raised seven children. Their first home was in Nemiscam when their eldest son Melvin was born. In April 1950, they moved to Craigor, Alberta, this is when Leona was born. In October 1950 they moved to New Dayton where Carol, Bev, Sandi, and Les were born. In 1959, they bought the Charles Young house, and four years later Greg was born. Alice remained in the house until her passing.
As a young girl she played ball with the Etzikom women’s team. She was an active member of the New Dayton Home and School Association, served as a member of the Girl Guides and was very active in slow-pitch, horse shoes, and curling. She was very proud to have participated in the Southern Alberta Summer Games and brought home a few medals. She also enjoyed many fishing trips with her family and friends. Alice was employed as a custodian at the New Dayton School as well as the hotel.
Alice was active in the church and enjoyed being a welcomed guest of the Mennonite Community. She spent many hours at the sewing machine, knitting, and crocheting as well as many other crafts. Alice loved music especially when listening to a polka with her toes tapping.
She will be fondly remembered and loved by friends and family.
Alice is survived by her four daughters Leona (Ken) Ives, Carol (Stan) Smith, Beverly (Eric) Criddle, and Sandra (Norman) Underhill; three sons Melvin (Rachel) Rarick, Leslie Rarick, and Gregory (Joanne) Rarick; grandchildren Candida, Jodi Ann, Melanie, Darren, Robert (Lisa Davey) Ives, Richard (Jayna) Ives, Rodney (Julia Drodge) Ives, Veronica McKie (Mario), Thomas, Stacey (Ed) Enequist, Denise (Daryl) Silzer, Todd (Christin) Jakubowski, Kristi (Dan Hicks) Jakubowski, Jerri (Dallas) Judd, Kandi (Ben) Howard, Dustin Underhill, Michael Rarick, Joseph Rarick, Devin Rarick, and Jodianne Rarick; as well as 30 great-grandchildren and 3 great-great-grandchildren. Also, one sister Catherine Rarick; four brothers John Marthaller, Paul (Gladys) Marthaller, Ivan Marthaller, and LeRoy (Margaret) Marthaller; as well as numerous nieces, nephews, and their families.
Besides her loving husband Leo, Alice was predeceased by her parents Mike and Margaret Marthaller; brother Steve, sister Connie Barby, grandsons Troy Rarick and Gerald McKie.
A Memorial Reception will be held at 11:00am, Thursday, February 7, 2013 at the LETHBRIDGE LODGE HOTEL ANTON’S ROOM.
Those who wish, memorial donations may be made to Raymond Senior Center, 55E 100N Raymond, Alberta T0K 2S0, Heart and Stroke Foundation of Alberta, Box 2211, Lethbridge, Alberta T1J 4K7; or a charity of your choice in honour of the late Mrs. Alice Rarick.
Send condolences at www.mbfunerals.com.
Martin Bros. Funeral Chapels Ltd.
610 – 4 Street South
Lethbridge, AB T1J 4P3
Phone: (403)328-2361 Fax: (403)382-3623
Toll Free: 1-800-382-2901
www.mbfunerals.com

No Condolences for “RARICK Alice”