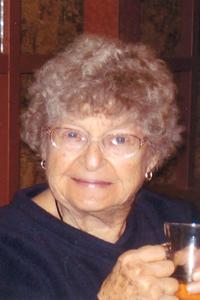 January 24, 1919 – February 8, 2013
HELEN CAVERS (nee Dorchak), beloved wife of the late Douglas James Cavers, passed away peacefully on Friday, February 8, 2013, at the age of 94 years.
Helen is survived by her sons, Donald (Maggie) and Bruce (Sonia); grandchildren, Doug, Chris, Cameron (Michiyo), and Shannon (John); great-grandchildren Brittany, Ashley, Leila, Cole, Brooke, and Rian; and two sisters Kay Stuckart, Vicki Psaltis. She was predeceased by her husband Douglas (Doc), daughter-in-law Diane in 1999, five brothers, and three sisters.
At her request, she will be cremated and no funeral service will be held. Family will be gathering in a private remembrance.
The family thanks the caring staff at Chinook Regional Hospital who kept Helen comfortable in her final weeks.
Send condolences at www.mbfunerals.com.
Martin Bros. Funeral Chapels Ltd.
610 – 4 Street South
Lethbridge, AB T1J 4P3
Phone: (403)328-2361 Fax: (403)382-3623
Toll Free: 1-800-382-2901
www.mbfunerals.com