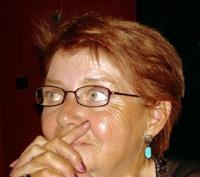 Sandra-Lee Cecile Najmeddine (née Baines)
It is with deepest sorrow that the family of SANDRA-LEE NAJMEDDINE announces her passing on February 11, 2013, at the age of 66 years.
Sandra-Lee was born in Lacombe, Alberta on July 30, 1946, living in Michigan for part of her childhood. She moved to Edmonton as a teen, where she later married and had one daughter, Zyna.
She worked for many years for the Hudson’s Bay Company, eventually becoming the Bay’s youngest department supervisor.
Sandra attended Grant Macewan College in 1972, taking courses in radio and television arts, and she became involved with Girl Guides of Canada as a leader.
In 1975, Sandra left Edmonton as a single parent, settling eventually in Hanna and going to work for Revelstoke Lumber as their bookkeeper. After several years with Revy, she returned to Edmonton to work again with The Bay in St. Albert.
Sandra’s life took her next to Ottawa in 1985, where she became a kitchen and bath designer before returning to Alberta in 1989.
While living with her daughter in St. Paul, Sandra-Lee became a teaching assistant at Ashmont Secondary School and over time worked at many schools in the St. Paul area. She was also a teacher at Kihew Asiniy School in Saddle Lake. She completed many training and certificate programs in working with youth at risk.
Sandra had a great love for First Nations culture and a special bond with the many Cree and Métis students she worked with. She undertook to learn Cree traditions and values and found a connection with Cree spirituality. She was respected by the people of Saddle Lake for her dedication to learning the traditional ways and for her love and commitment to the community’s youth.
Sandra-Lee’s final career move took her to Calgary in 2007 where she went to work for AltaLink in their regulatory department. She was admired for her intelligence, insight and work ethic. Sandra was also beloved by her colleagues for her compassion, spiritual intuitiveness and frank honesty. She remained at AltaLink until being diagnosed with cancer in September 2011.
Sandra-Lee made the decision to move south to the Lethbridge area to be with her daughter and family and focus her energy on getting well. She enjoyed time among her loved ones until her passing.
Known as “Kokum” to her grandchildren and “Notuk” to many of her friends, Sandra-Lee loved mystery novels, dark chocolate, strong coffee and a good glass of red wine with friends. Her favourite days were spent in the sun, enjoying the gifts of Mother Earth.
Sandra was a strong and free-spirited woman who was a compassionate and wise friend to many. Her strength of character had an impact on those around her and she was a beloved mother and grandmother.
She leaves treasured memories with her daughter Zyna Najmeddine Taylor, son-in-law Mark Taylor, and twin granddaughters Aliyah and Asia, in addition to numerous nieces and nephews and countless friends. She is predeceased by her mother Grace Kane (1992) and her father Archie Baines (2003).
Loved ones are invited to a celebration of Sandra’s life at a traditional Cree ceremony and memorial in Coaldale, Alberta, on Monday, February 18, 2013 at 1:00 p.m. COALDALE UNITED CHURCH HALL, 2022-18St, Coaldale, AB.
Flowers are gratefully declined – well-wishers may choose to make a donation in her honour to Free the Children: www.freethechildren.com/donate
Send condolences at www.mbfunerals.com.
Martin Bros. Funeral Chapels Ltd.
610 – 4 Street South
Lethbridge, AB T1J 4P3
Phone: (403)328-2361 Fax: (403)382-3623
Toll Free: 1-800-382-2901
www.mbfunerals.com