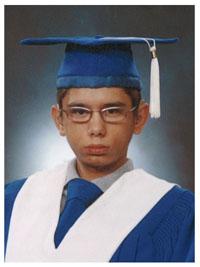 JONATHAN WRAY THIELEN of Lethbridge, passed away on February 15, 2013 at the age of 27 years. Jon was born in Regina, Saskatchewan on May 4, 1985.
He is survived by his father William Thielen of Milk River, AB., brother Christopher Thielen of Fort Mcmurray, AB., mother Lori Tuttosi of Calgary, AB., grandparents Gorden A. (Pudge) & Maryetta Thielen of Milk River, AB., uncles David of Olds, AB., Neil (Yvette) of Lethbridge, AB., Milton of Red Deer, AB., Aunt Nadine (Kevin) Bloz of Hardisty.
He was predeceased by his maternal grandparents Tony and Wilma Tuttois.
Jon lived in Calgary before moving to Milk River in 1988.
He attended Masinasin, Milk River Elementary School and Earl Rivers High School.
Jon would always find ways to do things when he could no longer do them the other way. Jon attended the School of Deaf in Winnipeg for four summers, School of Deaf in Edmonton for one summer, and Camp He-Ho-Haw for five summers. In 2002, he went to Australia with Chris, Grandma Thielen and Darren, funded by the Children’s Wish Foundation to see a Star Wars exhibit.
After graduating High School, he moved into Challenge House where he attended Catholic Central High School and graduated.
Throughout his years in school, Jon had teacher aids, as well as many specialists to help him grow into the young man he was. After school, he had caregivers. All of the people who ever worked with Jon grew attached to this young man with the way he was so organized and independent.
Jon made many friends. All those who saw him as an individual with a mind of his own. He would try to help out when he could or get someone to help.
He will be greatly missed by all who know and loved him.
A Prayer Service will be held at ST. PETER’S CATHOLIC CHURCH, 321 Main Street, Milk River, AB., on Tuesday, February 19, 2013 at 7:00 P.M. with Reverend Richard officiating.
A Funeral Mass will be held at ST. PETER’S CATHOLIC CHURCH, on Wednesday, February 20, 2013, at 11:00 A.M. with Reverend Richard officiating.
Honoured to Serve
Cornerstone Funeral Home & Crematorium
2800 Mayor Magrath Drive South
Lethbridge, Alberta T1K 7B1
Telephone ~ (403) 381-7777
Fax ~ (403) 381-3128
Toll Free ~ 1-(888)-381-7778
care@cornerstonefh.ca

No Condolences for “THIELEN Jonathan”

Leave a Condolence for Kelly Granlien