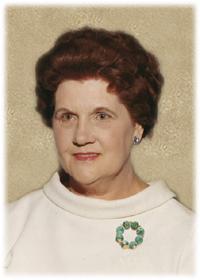 MIRANDA COOK, beloved wife of the late Bev Cook of Lethbridge, passed away at the Extendicare on Friday, February 15, 2013 at the age of 96 years.
She is the loving mother of Edward and Bob of Lethbridge and Sharon (Jim) Merchant of Calgary. She is lovingly remembered by 8 grandchildren and 5 great grandchildren.
She was predeceased by her husband Bev, one son Brian, 4 sisters and one brother and a daughter in law Agnes.
Miranda was born June 7, 1916 in Brandon, Manitoba. The family moved to Winnipeg when she was a teenager. She loved playing sports of all kinds. Miranda was an avid gardener all her life. She married her husband Bev in Winnipeg. Shortly after the war, they moved to Calgary and then to Lethbridge where they settled and raised a family. Her children remember Miranda as a wonderful cook and a loving mother. She spent her lifetime helping others, first her children and then her husband when he had a heart attack, and later as a volunteer at a senior’s residence. The family sends a special thanks to the staff at Extendicare Fairmont Park.
At Miranda’s request there will be a private family graveside at Mountain View Cemetery at a later date.
In memory of Miranda, donations may be made to a charity of one’s choice.
Honoured to Serve
Cornerstone Funeral Home & Crematorium
2800 Mayor Magrath Drive South
Lethbridge, Alberta T1K 7B1
Telephone ~ (403) 381-7777
Fax ~ (403) 381-3128
Toll Free ~ 1-(888)-381-7778
care@cornerstonefh.ca