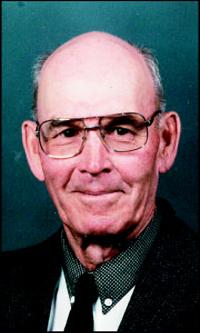 1923 – 2013
Clifford Dennis Reynolds, beloved husband of the late Norma Reynolds,
passed away in Lethbridge on Monday, February 18, 2013 at the age of 89
years.
Relatives and friends are invited to meet with the family at the Southland
Funeral Chapel, 5006 – 48 Avenue, Taber on Friday, February 22, 2013 between
7:00 P.M. and 8:00 P.M.
The Funeral Service will be held at the Enchant Community Hall, Enchant on
Saturday, February 23, 2013 at 11:00 A.M. with Pastor Jeffery Frostad
officiating. Burial to follow at the Enchant Cemetery. Condolences may be
forwarded by visiting our website at www.southlandfuneral.com.
Dennis is survived by his children Dale (Helen) Reynolds of Vauxhall, Dean
Reynolds (Sheri Gram) of Rocky Mountain House, Neil Reynolds of Calgary and
Murray (Helen) Reynolds of Enchant; grandchildren Jennifer (Lyle) Broderson,
Cherie (Trevor) Burke, Aubrey, Robin, Sara, Lewis, Brianne, Brooke and two
great grandchildren Brittany and Brady Broderson. He is also survived by his
sister Shirley Virostek; sister-in-law Lois Reynolds; brothers-in-law Allan
Bryant, Jerold Bryant, Ross (Colleen) Bryant and Walter (Donna) Bryant;
sisters-in-law Helen Bryant, Shirley Bryant and by numerous nieces and
nephews.
He was predeceased by his wife Norma Reynolds; brother Roy Reynolds;
sister-in-law Irene Reynolds; brother-in-law George Virostek; Norma’s
brothers Vern Bryant, Ken Bryant, Elwood Bryant and Harold Bryant and her
sisters-in-law Elsie Bryant and Connie Bryant.
Dennis was born in Picture Butte on September 7, 1923 to Cliff and Florence
Reynolds. On October 18, 1947 he married Norma Bryant and they raised their
family in the Enchant area, moving to the Town of Enchant in 1985. In 2006
they moved to Lethbridge where Dennis has resided since. He will be fondly
remembered and sadly missed.
If friends so desire, memorial tributes in Dennis’ name may be made
directly to the charity of one’s personal choosing.
Arrangements in care of Southland Funeral Chapel, Taber. Telephone: (403)
223-8778.

No Condolences for “REYNOLDS Dennis”