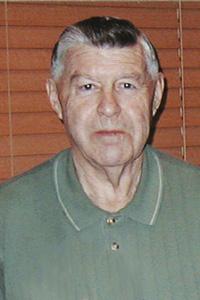 MR. DOUG HARROLD of Lethbridge, beloved husband of Carol Harrold, passed away on Tuesday, February 19, 2013 at the age of 77 years.
Doug was born in Lethbridge, Alberta on August 24, 1935 to Mildred and Harry Harrold. He was the youngest of three boys including Leo and Tom.
Doug retired from Canada Post in 1990 after 34 years of service.
He was active in the community, coaching both hockey and baseball. His passion for hockey continued as an off ice official with the Lethbridge Hurricanes (Broncos) for the past 30+ years. He was also involved with the Lethbridge Oldtimers Hockey Association as a player and a referee into his 70’s.
Besides his wife Carol, Doug is survived by his daughter Dyan (Darren) Kovacs; his son Bryan Harrold; his grandchildren Emily and Jamie Kovacs and Kevin Harrold; as well as numerous nieces, nephews and their families.
Doug is predeceased by his parents Mildred and Harry and his brother Leo.
Family and friends are invited to pay their respects between 7:00pm and 8:00pm on Sunday, February 24, 2013 at MARTIN BROTHERS RIVERVIEW CHAPEL, 610- 4th Street South, Lethbridge.
A Funeral Service will be held at 2:00pm on Monday, February 25, 2013 at MARTIN BROTHERS RIVERVIEW CHAPEL, with Pastor Ryan Thacker officiating. An interment to follow in the Mountain View Cemetery.
In lieu of flowers, those who wish may make a memorial donation in memory of Doug to Canadian Diabetes Association, 204, 2323 32nd Avenue NE, Calgary, Alberta, T2E 6Z3 or Lethbridge Minor Hockey Association, 1302 9 Avenue N, Lethbridge, Alberta, T1H 1H4.
Send condolences at www.mbfunerals.com.
Martin Bros. Funeral Chapels Ltd.
610 – 4 Street South
Lethbridge, AB T1J 4P3
Phone: (403)328-2361 Fax: (403)382-3623
Toll Free: 1-800-382-2901
www.mbfunerals.com

No Condolences for “HARROLD Doug”