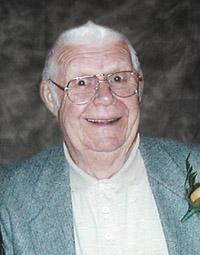 THOMAS WILLIAM HARROLD, beloved husband of Pauline Harrold, passed away at the Chinook Regional Hospital on Wednesday, February 20, 2013 at the age of 80 years.
Thomas is leaving behind his daughter Jane (Gary) Stratichuk, their children Ryan (Amanda), Aaron, and Evan (Meg); son Mark (Lori nee Potts) Harrold, their children Richard and Katelyn; and daughter Jeniffer, as well as numerous nieces and nephews.
He was predeceased by his parents Harry & Mildred Harrold, brothers Leo and Doug Harrold and his son Gordon Harrold.
Tom was born in Lethbridge, Alberta at the Galt Hospital on April 5th, 1932 to the proud parents Harry and Mildred (Hall) Harrold, the second child of three, all boys. Tom grew up in Lethbridge and attended Westminister Elementary School as a young boy and later LCI High School. He was very active in sports, playing basketball, hockey, baseball/ fastball, in fact the juvenile hockey team that he played goal for (Lethbridge Native Sons , 1947 – 1949) would later be inducted into the Lethbridge Sports Hall of Fame (1986, in the team category), as the first Lethbridge team to win a Western Canadian Championship. He was an avid coin collector, sports cards and sports memorabilia collector, as well enjoyed playing golf, darts, cribbage and numerous card games.
Tom enlisted in the Royal Canadian Air Force in 1949 and started his life as a world traveller. After he enlisted, his first stop was Nottingham, England, where he met a young lady named Pauline Walker, who he would wed in 1954 and become Mr. and Mrs. Tom Harrold. Tom and Pauline started a family with the birth of their daughter Jane, then their son Gordon, followed by another son, Mark, and finally their baby daughter Jeniffer. Tom served 28 years in the RCAF, being stationed at several armed forces bases across Canada and around the world. He retired from the RCAF in early part of 1976 and wasted little time in retirement, and started a new job with Alberta Transportation in November, that same year. He spent the next 16 years as a safety supervisor for the highways of Southern Alberta, until he retired in October of 1992.
A Memorial Service will be held at CORNERSTONE FUNERAL HOME, 2800 Mayor Magrath Drive South, Lethbridge, AB on Saturday, February 23, 2013 at 3:00 P.M. with Sister Josephine Keyzer officiating.
In lieu of flowers, donations may be made to The Lethbridge Senior Citizens Organization: 500 – 11 St. South, Lethbridge, AB T1J 4G7 or to the Canadian Cancer Society: 317 – 10 St. South, Lethbridge, AB T1J 2M7.
Honoured to Serve
Cornerstone Funeral Home & Crematorium
2800 Mayor Magrath Drive South
Lethbridge, Alberta T1K 7B1
Telephone ~ (403) 381-7777
Fax ~ (403) 381-3128
Toll Free ~ 1-(888)-381-7778
care@cornerstonefh.ca