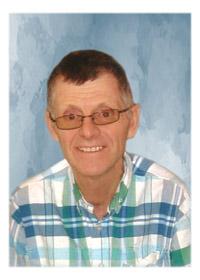 DOUGLAS JAMES “LIGHTENING” CROWE, passed away at Edith Cavell Care Centre on Thursday, March 7th, 2013 at the age of 61 years.
Doug was born September 7, 1951 in High River, Alberta. When he was 6 years old the family moved from Longview to Stavely. Doug received his education between Stavely, Nanton and Claresholm. After graduation in 1971 Doug worked at various jobs: construction, farm labourer. In 1975 Doug purchased his 1970 Mack truck and started his own company, General Hauling. In 1980 Doug leased his truck with Lamb’s Trucking in Claresholm, where he worked for Orville and Donna Lamb until he sold his truck a few years later. He then moved down to Cardston and worked with his parents running the Cardston & District Livestock Auction Market. After the market was sold, Doug went and worked for Gordon Nelson of Cardston. Doug was also employed by various trucking companies in Southern Alberta. In 1990 Doug was hired on with B/D Walter Trucking as a highway driver. Then he worked with the Walter Harvesting Crew, hauling harvest machinery and grain away from the combines. In 2009 when Doug’s health started slowing him down, he would stay closer to the farm. Doug resided at the Walter farm until 2011 when his health would no longer allow him to live by himself he moved into the Edith Cavell Care Centre in Lethbridge and resided there until his passing.
Doug is survived by his brother, Mike of Cremona, brother, Bryan (Carol Ann) of Stavely, one sister, Leslie Schlosser (Ron) of Stavely, sister-in-law Leslie Crowe of Nanton, sister-in-law Janine Crowe of Halifax, Nova Scotia. He is also survived by nieces, nephews, one great-nephew and 1 great-niece. He was predeceased by his mother, Marguerite, father, Jim, sister, Dixie, Sister, Shannon and one brother, Tom.
The family sincerely thanks the staff of Edith Cavell Care Centre and Dr. Orr for all their wonderful loving care.
A Service of Remembrance will be held at CORNERSTONE FUNERAL HOME, 2800 – Mayor Magrath Drive South, Lethbridge on Tuesday, March 12, 2013 at 1:00 P.M., with Pastor Jeff Enfield officiating. Interment will be held at a later date.
Honoured to Serve
Cornerstone Funeral Home & Crematorium
2800 Mayor Magrath Drive South
Lethbridge, Alberta T1K 7B1
Telephone ~ (403) 381-7777
Fax ~ (403) 381-3128
Toll Free ~ 1-(888)-381-7778
care@cornerstonefh.ca

No Condolences for “CROWE Douglas”