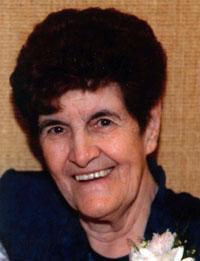 MINNIE AMELIA GALLUP, 1922 – 2013, beloved wife, mother, grandmother, great grandmother, great-great grandmother, and friend, passed away quietly and eagerly on March 4, 2013 in Cardston, Alberta at the age of 90. Minnie was born November 14, 1922 in Edmonton, Alberta, Canada. Minnie’s parents, Harold Lester Martin and Orah Casson Cahoon, moved their family from Cardston, Alberta to Boundary Creek, a small community in south west Alberta, beneath the majestic Old Chief Mountain. This is where Minnie spent her formative years.
Minnie married Earl Blaine Gallup on December 14, 1939 in the Cardston Alberta Temple of The Church of Jesus Christ of Latter-day Saints and was married 71 years at the time of Blaine’s passing in October 2010.
Blaine and Minnie lived for a time in Rosemary, Alberta where Blaine worked on the family dairy farm. They eventually settled in Cardston where they raised their family. They were blessed with nine children – Hal, Stephen, Del, Mary, Susan, Roger, Dan, Paula and Eva. Minnie was a faithful active member of The Church of Jesus Christ of Latter-day Saints and served faithfully in many capacities. When Blaine retired, they served a couples mission for the LDS Church in the Philippines. They had a wonderful experience and have a great love for the Filipino people. They also served an LDS mission in Salt Lake City at the Family History Library. Minnie had a profound love for her family and for the Savior.
Minnie is survived by her children: Hal (Connie) of Lethbridge, AB; Del (Jeanie) of Redondo, CA; Mary (Mark) Bauer of Boise, ID; Susan (Michael) McPeek of Boise, ID; Roger (Ronda) of Denver, CO; Dan (Suzanne) of Cedar Hills, UT; Paula (Rob) Ellingson of Grapevine, TX; Eva (Waid) Isfeld of Cardston, AB; 28 grandchildren; 41 great grandchildren and 3 great-great grandchildren.
Minnie was predeceased by her husband, Earl Blaine; son, Stephen; grandsons, Dan Nabors, Arthur Francis Gallup; brother Stephen Martin.
The Funeral Service will be held at The Church of Jesus Christ of Latter-day Saints, Temple Street Chapel, Cardston, Alberta on Saturday, March 9th, 2013 at 11:00 a.m. Friends may meet the family at the Church from 9:45 to 10:45 a.m. prior to the Service. Interment in the Cardston Cemetery, Cardston, Alberta.
Email your condolences to: legacyfh@telus.net
Arrangements entrusted to Cal Salmon
Legacy Funeral Homes Ltd.
P.O. Box 208
Cardston, Alberta T0K 0K0
Phone (403) 653-3222
Fax (403) 653-3677
legacyfh@telus.net