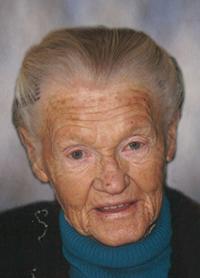 “The eternal God is your refuge, and underneath are the everlasting arms.” Deut. 33:27a
Called to her eternal home by our Heavenly Father, Hilda Nieboer, formerly of Nobleford, passed away peacefully on Monday, March 4, 2013 at the age of 91 years.
Hilda was predeceased by her two husbands Gerrit Rietman (1966 – 1970) and Jenne Nieboer (1972 – 1979) as well as six sisters and a brother.
Memories of Hilda are shared by her twelve step children and their extended families. She also leaves to mourn a sister in the Netherlands, her sister-in-law, Henrietta Nieboer, of Lethbridge, and numerous nieces and nephews.
Interment will take place at the Nobleford/Monarch Cemetery on Thursday, March 7, 2013 at 2:00 P.M.
A memorial service will be held at the NOBLEFORD CHRISTIAN REFORMED CHURCH, 522 Highway Avenue, Nobleford, AB., on Wednesday, March 27, 2013 at 1:00 P.M.
A special thank you to all the staff in Cottage 5 and other support staff at Good Samaritan Park Meadows Village for all the care they have given Hilda since January 2008.
God bless you all!
Honoured to Serve
Cornerstone Funeral Home & Crematorium
2800 Mayor Magrath Drive South
Lethbridge, Alberta T1K 7B1
Telephone ~ (403) 381-7777
Fax ~ (403) 381-3128
Toll Free ~ 1-(888)-381-7778
care@cornerstonefh.ca