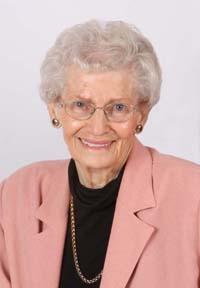 ZELMA DAHL LOW, beloved wife of Robert Douglas Low, passed away peacefully in Cardston on March 11, 2013 at the age of 86 years.
Zelma was born in Raymond, Alberta on December 8th, 1926 to Ronda Powel and Lauretta (Salmon) Dahl. She was raised with five sisters and two brothers on a small sugar beet farm west of Raymond, where she learned early the value of hard work.
Upon graduation from high school, she moved to Cardston and worked at the Treasury Branch. After an LDS mission to Eastern Canada, she married Robert Low and settled in Cardston. She was a devoted wife and supportive mother of six children. Her greatest happiness was found spending time with family.
She enjoyed crocheting, genealogy and travel. She always put her best effort into everything she did and encouraged her children to do the same.
After retirement, she and Bob served LDS missions in Washington, D.C. and New Zealand. She spent her later years serving in the temple, enjoying her children and grandchildren.
She is survived by her loving husband Bob; her children JoAnne (Bart) Milner of Edmonton, Brian (Cynthia) Low of Cardston, Shirley (Will) Burtenshaw of Edmonton, Ron (Tammy) Low of Magrath, Margie (Darren) Remington of Seattle, WA, Jim (Janelle) Low of Cedar Hills, UT; 29 grandchildren; 23 great grandchildren. She is also survived by four sisters, Janet (Ernie) Zobrist of Las Vegas, NV, Norma (Lawrence) Turner of Magrath, Fern (Jack) Hicken of Stirling, and Dianne (Brian) Dudley of Raymond. She was predeceased by brothers Mark (Helen) Dahl, Eugene (Carol) Dahl; sister Margaret (Gerald) Leishman and granddaughter Madison Remington.
Friends may meet the family at Legacy Funeral Home, Cardston on Thursday, March 14, 2013 from 7:00 to 8:00 p.m. or at the Church from 10:00 to 10:45 a.m. prior to the Service. The Funeral Service will be held at The Church of Jesus Christ of Latter-day Saints, Temple Street Chapel, Cardston, Alberta on Friday, March 15, 2013 at 11:00 a.m. Interment in the Cardston Cemetery.
Email your condolences to: legacyfh@telus.net Arrangements entrusted to Ralph Salmon
Legacy Funeral Homes Ltd.
P.O. Box 208
Cardston, Alberta T0K 0K0
Phone (403) 653-3222
Fax (403) 653-3677
legacyfh@telus.net