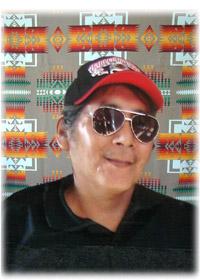 NORMAN MELVIN CALF ROBE “Pinotoyi”, beloved husband of 21 years to Brenda Red Young Man of Lethbridge, passed away at the Chinook Regional Hospital on Monday, March 11, 2013.
Norman was born on July 18th, 1961 to Mabel Gros Ventre Boy and Anthony Wolf Child, but on that beautiful day, he brought great joy and happiness when he became the son of Ed Calf Robe and Marion McDonald.
“PINOTOYI” was given to him by his grandmother Alice Calf Robe – she was the holder of the Horn Society Bundle – “PINOTOYI”.
Norman received his education at St. Mary’s Residential School then transferred to Cardston where he attended Lee Creek Elementary and Cardston High School. In 1978 he moved to Lethbridge and attended LCI High School and Red Crow College.
Some of Norman’s employment included Napi Lodge as an on-call client driver, Sifton House as a Youth Care Worker and Counselor, Lethbridge Hide Plant as a labourer, Winroc Construction as a labourer, Lucerne Foods with his friend Rocky White Quills, and Thunder Chief Gas Bar as a night attendant.
Norman was a humble, loving, caring, and generous individual. He also had a love for music and was extremely talented and charismatic which drew people to him. He was a self proclaimed bush mechanic, an avid bicycle repairman and skilled in carpentry.
In his younger years, he was a part of the Kainai Boxing Club under the direction of his late father, Ed Calf Robe, his late Uncles Hugh and Gus Calf Robe, and his late brother-in-law, Warner Scout. He also had the opportunity to take part in a cultural exchange with the Hawaiian Islands and Ninastiko Dance Troupe as a traditional dancer. As a dancer, he and his family, travelled extensively throughout the United States and Canada
A Wake Service will be held at THE LETHBRIDGE FRIENDSHIP CENTRE, 1709 – 2nd Ave. South, Lethbridge, AB, on Friday, March 15th, 2013 from 7:00 –11:00 P.M.
A Funeral Mass will be celebrated at ST. BASIL’S CATHOLIC CHURCH, 604 – 13th St. North, Lethbridge, AB, on Saturday, March 16th, 2013 at 11:00 A.M. with Father Roque Pereira Celebrant.
Interment to follow at St. Catherine’s Cemetery in Stand Off, AB.
Honoured to Serve
Cornerstone Funeral Home & Crematorium
2800 Mayor Magrath Drive South
Lethbridge, Alberta T1K 7B1
Telephone ~ (403) 381-7777
Fax ~ (403) 381-3128
Toll Free ~ 1-(888)-381-7778
care@cornerstonefh.ca