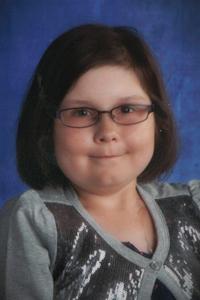 2001 ~ 2013
Madison Elizabeth Hirlehey received her wings in the early morning of Saturday, March 16, 2013 after fighting cancer for almost 7 years.
Maddie is survived by her loving parents Steve and Linda Hirlehey; sister Samantha; grandparents Frances Hirlehey (predeceased by her grandfather Fred Hirlehey) and Walter and Olga Shaskin; aunty Laura Shaskin; uncle Igor and aunt Julie; cousins Andrew and Evan Shaskin; aunty Helen and uncle Dave Wolfe; as well as countless other family and friends.
Maddie was an inspiration for anyone she came into contact with and she was very much her family’s hero. She faced every challenge with a smile and throughout her journey very rarely complained. Your family and friends will forever love & miss you.
The family would like to say a special thank you to the following; Marla, Terry, Kelly, Claire, Larry, as well everyone else at the Ronald McDonald house; all the staff at the Rotary Flames House; Dr. Victor Lewis, Moira Hill and all the doctors, nurses and staff at the Alberta Children’s Hospital as well as the staff and friends at the Galbraith Elementary School & Wilson Middle School.
Vigil Rites will be held at 7:00 pm on Friday, March 22, 2013 at the MARTIN BROTHERS RIVERVIEW CHAPEL, 610- 4 Street South, Lethbridge, AB.
A Funeral Service will be held at 1:00 pm on Saturday, March 23, 2013 at the MARTIN BROTHERS RIVERVIEW CHAPEL. In honour of Maddie we ask that everyone please wear something pink.
In lieu of flowers, memorial donations may be made in Maddie’s name to the Ronald McDonald House, Southern Alberta, www.rmhsouthernalberta.org.
Send condolences at www.mbfunerals.com
Martin Bros. Funeral Chapels Ltd.
610 – 4 Street South
Lethbridge, AB T1J 4P3
Phone: (403)328-2361 Fax: (403)382-3623
Toll Free: 1-800-382-2901
www.mbfunerals.com

No Condolences for “HIRLEHEY Madison”