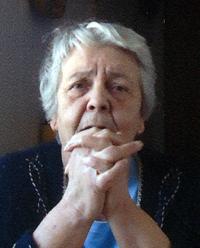 GERALDINE “GERI” TOOBY, beloved wife of the late Ronnie, passed away in New Dayton on Monday, March 18, 2013 at the age of 76 years.
She is the loving mother of: Carol (Bruce Hancock), Kevin (Laura), and Jillian (Geordie) King; grandmother of: Keith, Caitlyn, Courtney, and Jordan. Geri is survived by her great grandchildren: Kayla, Kristy, Kaden, Cohen, Ileigh, and a sister Peggy Rose.
Geri is predeceased by a daughter Susan, and a brother Roy Jenkinson.
Geri was born in Halifax, Yorkshire, England. In 1967 Geri and her beloved husband, Ronnie, moved to Southern Alberta, settling in Stirling with children Carol, Kevin and baby Susan in their hearts. In 1974 Jillian was a welcome addition to the family.
Geri worked for several years caring for others at Southland and Devon nursing homes. In her retirement, Geri extended that caring nature to many stray and abandoned animals on the acreage she shares with Jillian, Gordie and Jordan.
You will forever be in our hearts.
The Funeral Service will be held on Friday, March 22, 2013 at 10:00 a.m. at CHRISTENSEN SALMON GENERATIONS FUNERAL HOME, 703-13 Street North, Lethbridge.
Interment to follow in the Mountain View Cemetery, Lethbridge.
Christensen Salmon Generations Funeral Home Ltd.
703-13 Street North
Lethbridge, AB T1H 2T2
Phone: (403) 382-3601
Fax: (403) 320-1492
Email: condolences@generationsfh.ca
Sign guest book: www.generationsfh.ca

No Condolences for “TOOBY Geraldine”