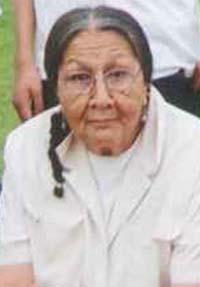 “Aatsootsipisttohkomi “
Born: October 3, 1933 Died: March 22, 2013
“She watched her children grow, she nurtured and raised her family well. She now rests in a garden filled with flowers,with all of life’s sweet fragrances. She is Home.”
ALFREDA DELANEY, beloved wife of the late Adam Delaney, passed away peacefully at the Calgary Foothills Hospital on Friday, March 22, 2013, surrounded by family, relatives and friends.
Alfreda was born at the Blood Indian Hospital in Cardston, AB. on October 3, 1933. She received her education at the St. Paul’s Anglican School and then met her life-long partner Adam in the early fifties. Together they brought up their family in the Moccasin Flats area where they raised their prized race horses. As a young woman, Alfreda was employed as a supervisor at St. Paul’s Residential school. She was also employed there as a cook for many years.
During their early years together, both Alfreda and Adam became more involved in the spiritual ways of the Blackfoot. As Adam walked deeper onto the traditional paths, Alfreda was his constant companion. Together, they guided the Horn Society and its members when Adam became the leader in the 1970’s. This began their life-long journey in the spiritual ways of our people.
Alfreda was a loving and caring wife, mother, grandmother, sister and friend. Her pride in her surroundings showed in the way they cared for their house. Adam’s skill at planting trees and landscaping made their home a beautiful place to raise their children, and to welcome their many friends from around the world. Alfreda became a mother to many people, and the many people who entered into her home, became a part of her growing and loving family.
Alfreda is survived by her children: Sonny (Barbra), Michael, Delphine, Brandi; brothers Frank and Francis Small Eyes; sister-in-law Debi Small Eyes; 10 grandchildren, several great grandchildren, and great great granddaughter.
Alfreda was predeceased by her parents George & Rosie Small Eyes; siblings Thomas, Charlie (Irene), Herbert (Louise) Bull Shields, Beatrice (Joe) Shouting, Molly, Teresa, and George Small Eyes Jr..
A Wake Service will be held at the MOSES LAKE GYM, Blood Reserve on Wednesday, March 27th from 7:00 to 11:00 p.m. The Funeral Service will be held at St. Paul’s Anglican Church on Thursday, March 28th at 11:00 a.m. Interment in St. Paul’s Cemetery, Blood Reserve.
Email your condolences to: legacyfh@telus.net
Arrangements entrusted to Cal Salmon.
Legacy Funeral Homes Ltd.
P.O. Box 208
Cardston, Alberta T0K 0K0
Phone (403) 653-3222
Fax (403) 653-3677
legacyfh@telus.net

No Condolences for “DELANEY Alfreda”