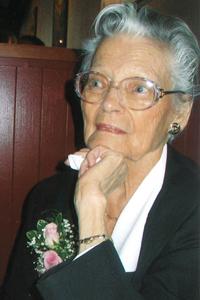 1917 ~ 2013
It is with sadness that we announce the loss of AUDREY MURIEL HADFORD. Audrey passed away in the early morning of February 3rd, 2013, with her eldest granddaughter at her side, in the Fort Macleod Extendicare at the age of 95 years.
Audrey was the granddaughter of Samuel Rex and Annie Brady, owners of the first bakery in Lethbridge and the second child of Florence (Flossie) and Morley (Pop) Dickout of Iron Springs, Alberta. She was born on the family farm with the help of midwife Annie Brady on October 9th, 1917. Audrey’s mother passed away when she was seven years old and she and her three brothers were raised by her father and many relatives. She attended the Huntsville School near Iron Springs. In 1939, she married Leighton Wallace Hadford (Bud). When Bud joined the RCAF in WWII, she followed him throughout Canada with two children in tow. After the war, they settled in Picture Butte and Bud operated a garage. In 1952, they moved to Warner, Alberta so that Bud could manage the Hadford Seed Cleaning Plant. Bud passed away in 1957.
Audrey loved cooking and was a wonderful baker of pies and bread, so in 1962 she enrolled in the Commercial Cooking Class at the Lethbridge Junior College. She graduated as the Most Proficient Student in 1963. Audrey worked in Lethbridge until 1966. She then moved to Terrace, B.C. with Barry, Keith and his young family for employment. She cooked for many years at the Mills Memorial Hospital, a job she loved. While in Terrace she met George Bekefy. They enjoyed cooking, gardening, dancing and camping in the wild. Upon retirement, they moved from Terrace to Penticton and finally home to Lethbridge, and were together until his passing in 2009 at the age of 87. Audrey was a past member of the Order of the Eastern Star and the Royal Purple.
Audrey was an avid reader of books throughout her life and she passed this passion onto her family; she had a book on-the-go a week before her final day. She believed anything was possible, loved to try new things and she encouraged others to do the same. We are so fortunate to have had her in our lives for so many years.
Audrey is survived by her four children Alyx Nemeth (Edward), Keith Hadford (Beverley), Phillip Hadford (Isabell), and Barry Hadford (Deborah); her twelve grandchildren, twenty-four great-grandchildren and six great- great- grandchildren. She is also mourned by her youngest brother Stuart and his wife Anne, her close first cousins Ruth Wright, Flossie Erno, and Mary George (James) and a sister-in-law Janet Dickout. She was predeceased by her brothers Elmer (Bernice) and Clarence Dickout, Leighton’s six siblings, and granddaughter, Karin.
A Memorial Service will be held at 11:00 am on Saturday, March 30, 2013 at MARTIN BROTHERS RIVERVIEW CHAPEL | 610-4th Street S., Lethbridge, Alberta.
In lieu of flowers, donations may be made to the Residents Recreational Fund, Fort Macleod Extendicare | Box 189, Fort Macleod, AB T0L 0Z0.
Send condolences at www.mbfunerals.com.
Martin Bros. Funeral Chapels Ltd.
610 – 4 Street South
Lethbridge, AB T1J 4P3
Phone: (403)328-2361 Fax: (403)382-3623
Toll Free: 1-800-382-2901
www.mbfunerals.com

No Condolences for “HADFORD Audrey”