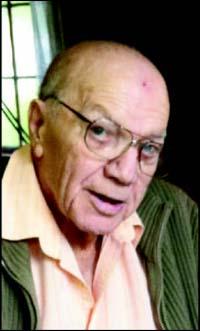 1922 – 2013
James Andrew Ross, beloved husband of Clare Ross of Balfour, British
Columbia (formerly of Vauxhall), passed away at home on Wednesday, March 20,
2013 at the age of 90 years.
Relatives and friends were invited to meet with the family at the Southland
Funeral Chapel, 5006 – 48 Avenue, Taber on Monday, March 25, 2013 between
7:00 P.M. and 8:00 P.M.
The Funeral Service will be held at the Southland Funeral Chapel, 5006 – 48
Avenue, Taber on Tuesday, March 26, 2013 at 2:00 P.M. with Reverend Alana
Johnson officiating. Burial to follow at the Vauxhall Cemetery. Condolences
may be forwarded by visiting our website at www.southlandfuneral.com.
Jim will be lovingly remembered by Clare, his wife of sixty seven years and
their sons Bruce Ross (Deborah Grant) of Balfour, British Columbia and James
Ross Jr. of Sidney, British Columbia. He is also survived by his
grandchildren Rachel Ross-Culligan, Melissa Clifford, Margaret Clifford,
John Ross, James Ross and by his niece Valerie Davis.
He was predeceased by his daughter Heather Clifford, grandsons Dane Ross
and Jeremy Ross, daughter-in-law Shelley Ross, his twin brother Jackie Ross
and sister-in-law Irene Ross.
If friends so desire, memorial tributes in Jim’s name may be made directly
to The Children’s Wish Foundation of Canada (Alberta & N.W.T. Chapter –
Calgary Office) 271, 339 – 50 Avenue SE, Calgary, Alberta T2G 2B3
(www.childrenswish.ca).
Arrangements in care of Southland Funeral Chapel, Taber. Telephone: (403)
223-8778.

No Condolences for “ROSS Jim”