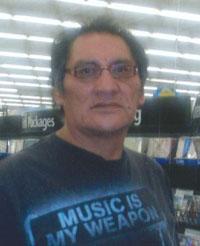 KSISS TSI KOMOH KII TOPI
“Thunder Rider”
It is with great sadness and heavy hearts that we announce the sudden passing of our dear father, beloved husband, grandfather, brother, uncle and friend, Reo “Thunder Rider” Hairy Bull (Across The Mountain); on Sunday, March 24, 2013, in Cardston, Alberta, at the age of 55 years.
Reo was born on February 21, 1958 in Cardston, Alberta, to loving parents, the late Paul Hairy Bull Sr. and the late Bernadette Across The Mountain; and was raised on the Blood Reserve. Reo received his schooling in Levern, Cardston, Glenwood and at Red Crow Community College. In his younger years, Reo was considered to be a sports fanatic. He enjoyed all sports and excelled in fastball and track & field, receiving various trophies in the process. He was also an avid volleyball player. Friends and family would always look forward to his outdoor volleyball tournaments on July 1st of every year at his “Graceland.” Prior to his passing, Reo was employed by the Blood Tribe Administration as a Security Guard at the Shot Both Sides Building and the Levern Health Unit.
Reo was also proud of his native heritage. He would travel throughout Canada and US on the Pow Wow trail yearly as a traditional dancer and established many life long friendships in the process. He was a creative person who designed his own Pow Wow outfits and his Elvis impersonating outfits. He had a special talent of impersonating Elvis Presley. He was always more then willing to showcase his impersonations at family gatherings and special events and because of this, he was nicknamed “Elvis.” Hand games were another hobby that Reo enjoyed and travelled with family to many hand game tournaments. Another talent and hobby was his arts and crafts and beading. He designed his home with his own art work.
Reo was a humble soul who had nothing but respect and kindness to those who knew him. He was a caring individual who always went out of his way to help others. Reo had a great sense of humor and liked to play jokes on everyone and always managed to make intense situations become bearable. He enjoyed visiting with friends and always made people feel at home and welcomed. Reo also loved spending time with his many grand children, adopted children and adopted grandchildren. Reo married the love his life Molly on August 25, 2001. Together they made a loving home in Levern until his passing. Reo had a gentle demeanor and as a result made numerous friends. Because of these characteristics, he will be dearly missed and forever remembered by all who knew him.
Reo is survived by his loving wife Molly; his children Bernadette (Tyrone), Shayla (Paul) Shouting, Appalonia Morning Bird, Deanna Black Plume, Damien (Jocelyn) and Reno Shouting ; his “baby boy” Leonard; God children Kristy (Mathew) Bare Shin Bone and Averi Eagle Plume; brother Eugene and half sister Bernadine Across The Mountain; twenty-three grand children; adopted mother Louise Eagle Plume; adopted children Charlene (Leon) Gros Ventre Boy, Colby Black Water, Pam (John Thomas) Bare Shin Bone, and Christine & Bobby Healy; adopted brothers Patrick (Sylvia) & Bruce (Carol) Bare Shin Bone, Bobby Across The Mountain; half sister Bernadette Cox; adopted sisters Edna, Rosabelle and Carmen Bare Shin Bone, Roxanne and Debra (Rex) First Charger, Vivian (Clark) Left Hand, Noreen Black Plume, and Margaret (Ron) Across The Mountain/McDonald; aunts Christine Delorme, Gloria (Jack) Red Crow, Edna; great aunt Eva Hind Bull; uncles Martin Hairy Bull, James, Joe, and Norbert Across The Mountain; great uncle Donald (Beatrice) Big Swallow; and numerous and nieces, nephews, cousins and extended family.
Reo was predeceased by his parents Paul Hairy Bull and Bernadette Across The Mountain; adopted parents Paul Sr. & Mary Stella Bare Shin Bone; sister Delores and brother Paulie; son Andy Gros Ventre Boy, maternal grandparents John & Lily (Shot Both Sides) Across The Mountain; aunts Isabelle Coal (Across The Mountain), Lily Across The Mountain Mary L. Across The Mountain; adopted brothers Paul Jr and Allan Bare Shin Bone; nieces Stacey Big Sorrel Horse and Sonya Day Rider; adopted granddaughter Courtney Gros Ventre Boy.
A Family Service will be held at Legacy Funeral Home, Cardston, Alberta on Thursday, April 4, 2013 from 5:00 to 6:00 p.m. The Wake Service will be held at the Senator Gladstone Hall on Thursday, April 4th from 7:00 to 11:00 p.m. then continuing all night at Reo and Molly’s residence in Levern, Blood Reserve.
The Funeral Service will be held at St. Mary’s Catholic Church, Blood Reserve on Friday, April 5th, 2013 at 11:00 a.m. with Father Pawel Andrasz officiating. Interment in the Pioneeer Cemetery, Blood Reserve. Feast to follow at the Senator Gladstone Hall. Funeral arrangements entrusted to Berry Gorham.
Legacy Funeral Homes Ltd.
P.O. Box 208
Cardston, Alberta T0K 0K0
Phone (403) 653-3222
Fax (403) 653-3677
legacyfh@telus.net

No Condolences for “HAIRY BULL Reo”