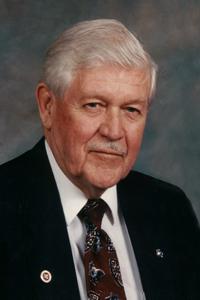 MAY 22, 1921 – APRIL 1, 2013
Robert (Bob) Arthur Simmons passed away in Lethbridge, Alberta on April 1, 2013 at 91 years of age after valiantly battling pneumonia and a failing heart.
Bob was the middle child of Edward and Charlotte Simmons born on the family farm in Rosemary, Alberta on May 22, 1921. He attended school in the Rosemary area and worked on the farm until World War II. Like so many of his contemporaries, Bob enlisted in the armed forces and became a pilot in the Royal Canadian Air Force stationed in England until after the end of the War. After coming home, Bob attended the University of Alberta in Edmonton where he received a BSc degree in Agriculture and became happily married to Barb who had sailed from Scotland to be with him.
Upon graduating, Bob was involved in the Alberta government program assisting veterans to acquire farmland and eventually became a District Agriculturalist with the Alberta Department of Agriculture in Taber, Alberta where he and Barb also started their family. Bob and Barb moved to Lethbridge, where they have lived ever since, and in January, 1959 Bob joined the group who founded Western Canadian Seed Processors, later to become Canbra Foods. Despite some early growing pains, the company became a thriving part of the economy of Lethbridge and southern Alberta. Bob was instrumental in the development and expansion of the rapeseed (later canola) industry in western Canada spending much of his time convincing farmers of the benefits of growing this crop. In the early 1960’s Bob, together with his friend, Walter Cleland, also started a bean plant in Bow Island, Alberta which continues to operate today under different ownership. After his retirement from Canbra, Bob still stuck to his agricultural roots by continuing to assist the Canola Growers Association and the Alberta Winter Wheat Growers.
Throughout his career he was an active and proud member of the Alberta Institute of Agrologists and the Agricultural Institute of Canada. Over the years he also spent countless hours volunteering with the Lethbridge Athletic Association, the Kiwanis Club and Scouts Canada. He became the “go-to guy” for organizing and working at bingos and casinos. Bob also enjoyed golfing, curling, badminton and had a lifelong passion for gardening. He loved to see things grow. But most of all Bob was a devoted husband, a great father and a loving grandfather to his family.
Bob is survived by his beloved wife of 64 years, Barbara Simmons; his four children, Colin Simmons (Kyra) of Calgary, Ron Simmons (Susan) of Winnipeg, Kathleen Murphy (Charlie) of Lethbridge and Debbie Buksewich-McPhie (Curtis) of Vancouver; and his seven grandchildren, Ryan Simmons, Alaire Simmons, Danielle Simmons, Bobby Simmons, Genevieve Simmons, Ainsley Murphy and Aleah Murphy. Bob was predeceased by his mother, Charlotte Simmons, his father, Edward Simmons, his younger brother, Richard Simmons, his older brother, Charles Simmons, his grandson, William Murphy, and his granddaughter, Alexandra Simmons.
Family and Friends are invited to pay their respects between 7:00 to 8:00 pm on Thursday, April 4, 2013 at MARTIN BROTHERS RIVERVIEW CHAPEL, 610 – 4th St. S., Lethbridge, Alberta.
A Funeral Service for Bob will be held at 2:00 p.m. on Friday, April 5, 2013 at the MCKILLOP UNITED CHURCH, 2329 – 15th Ave. S., Lethbridge, Alberta.
Bob’s family would like to extend their deepest appreciation to the staff of the Chinook Regional Hospital for the care and attention they provided to Bob during his last days and the several visits before.
In lieu of flowers, donations can be made to the Heart and Stoke Foundation, Box 2211, Lethbridge, Alberta T1J 4K7 or the Chinook Regional Hospital Foundation, 960 – 19th St. S., Lethbridge, Alberta T1J 1W5.
Send condolences at www.mbfunerals.com.
Martin Bros. Funeral Chapels Ltd.
610 – 4 Street South
Lethbridge, AB T1J 4P3
Phone: (403)328-2361 Fax: (403)382-3623
Toll Free: 1-800-382-2901
www.mbfunerals.com

No Condolences for “SIMMONS Robert”