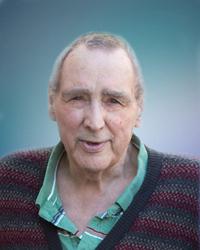 John 3:3
Jesus answered and said unto them, Verily, verily, I say unto thee, except a man be born again, he cannot see the kingdom of God.

The Van Leeuwen family would like to announce the passing of Clarence (Klaas) Van Leeuwen.
Born on June 19, 1933, Born again in April, 1964
Passed from this world to be with his Lord and Savior Jesus Christ on April 5, 2013
Loving Husband of Nita for 53 years. Father of Cindy (Russel) Gapp, Tony (Alanna) Van Leeuwen, Tim (Wanita) Van Leeuwen, Terry (Angel) Van Leeuwen, Crystal (David) Loewen and Pake to twelve grand children.
Also left behind; Tina Tuinhoff, Joanne (John) Deys, Heidi (Casey) Van Roon, Age (Lynn) Van Leeuwen.
Clarence Immigrated from Holland in 1953.
He met a beautiful Dutch girl in Lethbridge in 1956 and married her on July 25, 1959.
He loved God’s word and was passionate to share what Christ had done in his own life with anyone. He was very giving and generous and willing to help out any one in need.
Sewing Machines became a big part of his life as he partnered with his Parents owning Sunny South Garments, Working at Singer, Sears, and then his own Sewing Machine repair business.
A public viewing will be held at Cornerstone Funeral Home, 2800 Mayor Magrath Drive South, Lethbridge, AB., on Thursday, April 11th, 2013 from 4:00 to 6:00 P.M.
A Private Family Memorial Service will be held at Cornerstone Funeral Home at a later date.
A Private family graveside service will be held at Mountain View Cemetery at a later date.
In lieu of flowers, please make donations to the Bibles for Missions: 1004 1 Ave S Lethbridge, AB T1J 0B1
Honoured to Serve
Cornerstone Funeral Home & Crematorium
2800 Mayor Magrath Drive South
Lethbridge, Alberta T1K 7B1
Telephone ~ (403) 381-7777
Fax ~ (403) 381-3128
Toll Free ~ 1-(888)-381-7778
care@cornerstonefh.ca

No Condolences for “VAN LEEUWEN Clarence”