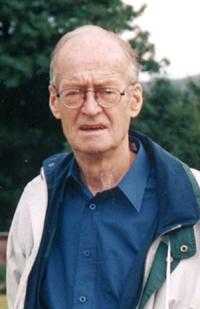 1933 ~ 2013
MR. MICHAEL “MIKE” DUCHAN of Lethbridge, beloved husband of Mary “May” Duchan, passed away peacefully on Sunday, April 21, 2013 at the age of 79 years.
Mike was born in Helensburg, Scotland on September 8, 1933.
Besides his loving wife May, Mike is survived by his daughters Kathryn (Greg) Fix of Katy, TX and Eileen Duchan of Lethbridge; his grandchildren Stuart, Taylor, and Drew Fix; his sister Eileen Asher of Brooks, AB; his brother Walter “Scotty” Duchan and Pauline of Lethbridge; as well as numerous nieces, nephews and their families.
Mike was predeceased by his parents Hugh and Helen Duchan and one sister Elizabeth.
Vigil Rites (Prayers) will be held at 7:00pm on Thursday, April 25, 2013 at MARTIN BROTHERS RIVERVIEW CHAPEL | 610- 4th Street South, Lethbridge.
A Funeral Mass will be celebrated at 10:30am on Friday, April 26, 2013 at OUR LADY OF THE ASSUMPTION CATHOLIC CHURCH | 2405- 12th Ave South, Lethbridge, with Father Kevin Tumback celebrant.
In lieu of flowers, those who wish may make memorial donations to the Multiple Sclerosis Society | 724- 13th Street North, Lethbridge, AB T1H 2T1.
Send condolences at www.mbfunerals.com.
Martin Bros. Funeral Chapels Ltd.
610 – 4 Street South
Lethbridge, AB T1J 4P3
Phone: (403)328-2361 Fax: (403)382-3623
Toll Free: 1-800-382-2901
www.mbfunerals.com

No Condolences for “DUCHAN Michael”