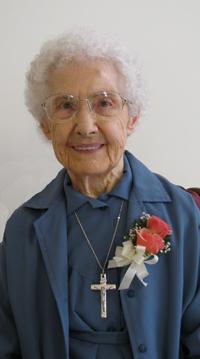 Knapik: Sister Marion, formerly Sister John Bernard, 94, a Sister of St. Martha of Antigonish, died at Bethany, motherhouse on Sunday, April 21, 2013. She was in the 71st year of religious life.
Born in Empress, AB, Sister Marion was the second of nine children of the late John and Marie (Suchanik) Knapik.
Sister entered the Congregation of the Sisters of St. Martha on October 12, 1939, pronounced her first vows August, 1941, and her perpetual profession of vows in 1944. After her profession of vows, Sister spent several years of her life in ministry in the dietary departments of institutions operated by the congregation. While serving as homemaker in CSM Convents in rural areas, she assisted in parish work, particularly with choir and catechetics. She ministered for some years as a Certified Nursing Assistant and as a volunteer in pastoral care of the sick.
In Nova Scotia, Sister Marion served in Antigonish, Main-a- Dieu, and Ingonish. In Alberta, she served in Lethbridge, Canmore, Blairmore, Banff, and Calgary. Sister Marion ministered, as well, in Broadview, SK, and Willowdale, ON.
In 1971, Sister Marion obtained certification as a Nursing Assistant from Foothills Hospital, Calgary. She also received a Certificate in Pastoral Care from University Hospital, Saskatoon in 1985.
This faithful Martha was a woman of the Prairies who cherished her call to religious life. Her living was characterized by hospitality, prayer and compassion.
Sister Marion is survived by a sister, Kathleen Matlock, and two brothers, Aloise and Victor. Besides her parents she was predeceased by two sisters; Jean Matlock and Pauline Lowes, and three brothers; Edward, Michael and Richard.
The remains will be resting at Bethany, beginning Tuesday, April 23, at 12:30 p.m. A Celebration of Vigil will be held on the same evening at 7:30. iturgy of Christian Burial will take place on Wednesday, April 24, at 2:00 p.m. in Bethany Chapel.
Arrangements are under the direction of MacIsaac Funeral Services, Antigonish.
Sister Marion, baptized Marion Helen, was born January 1, 1919, in Empress, AB.
Her father, John Knapik, was born in Przeciszow, Poland, and her mother, Marie (Suchanik) Knapik, was born in Brno, Czechoslovakia.

No Condolences for “KNAPIK Sister Marion”