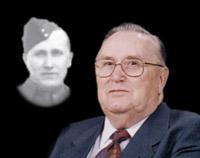 September 25, 1921 – April 29, 2013
Woodrow was born on a farm at Robsart, Saskatchewan. He is survived by his wife Gladys (nee Evenson); seven children Sharon (Ron) Fraser, Jim (Marg), Diana (Larry) Zaytsoff, Brian, Lee (Marie), Darrell (Lucy) and Nancy (Jim) Green; twelve grandchildren and twelve great-grandchildren. He is also survived by brother-in-law Norman Evenson and sister-in-law Nora Evenson. Woodrow was predeceased by his parents Nick and Helga Hanson, his sister Helen, brother-in-law Rolland, one niece and one nephew, one grandson and one great-grandson. In September of 1942 Woodrow entered the Canadian Army and served until November 1944. After discharge from the Service he worked as a grain elevator agent in Saskatchewan and in 1959 he and Gladys moved to Lomond, Alberta where he was Town Foreman. In 1967 they moved to Picture Butte where Woodrow again worked as Town Foreman and in 1969 they moved to Strathmore where Woodrow worked as Development Officer and Building Inspector for the Town of Strathmore. On December 31, 2012 Woodrow and Gladys celebrated their 70th wedding anniversary. Music was always a part of Woodrow’s life. He played the banjo, drums, and guitar with different orchestras in Southern Saskatchewan and Southern Alberta. In later years he entertained at various senior centres. Thank-you to Dr. Fanning, as well as the staff at Strathmore Hospital Continuing Care for the excellent care he received over the past five years. Funeral services will be held on Sunday, May 5, 2013 at Lord of All Lutheran Church, Strathmore, at 2:00 p.m. In lieu of flowers donations may be made directly to the Alzheimer Society of Calgary (201, 222 – 58 Ave SW, Calgary, AB, T2H 2S3). To send condolences, please visit www.wheatlandfuneralhome.ca

No Condolences for “HANSON Woodrow”