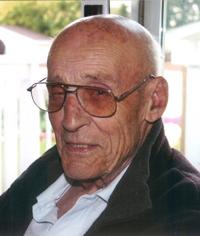 NORMAN ARCHIE PENNINGTON of Lethbridge passed away on April 30th, 2013, at the age of 91.
Norman was born on June 12, 1921 in Medicine Hat, Alberta. He later moved to Lethbridge as a young boy. He was a very avid hunter and fisherman. He spent time in the army and airforce before starting his career in 1946 with Canadian Pacific Railroad. He worked 361/2 years as a brakeman and conductor. After his retirement he spent many years camping, gardening and tending to his rose gardens. He was very proud of them.
Norman is survived by his son; Lyle (Lorraine) Pennington, his daughter; Brenda (Barb Halladay) Pennington, his step-daughter; Carol (Warren Mickels) McGuire and his step-son; Robert Perry, his grandchildren; Shari (Marc) Harding, Sarah (Lance) Krogman, Christine (Kendall) Jeske, Darren, Craig and Annie, great-grandchildren; Miykala, Weston, Morganne, Seth, Joyce, Carson and Landon, a brother Roy and sister Dorthy as well as numerous nieces and nephews. Norman was predeceased by his parents Freda and Fred Pennington, his first wife Olga and his second wife Joyce, his brothers Lloyd and Clarence and his sister Hazel.
A Graveside Service will be held at Mountain View Cemetery on Scenic Drive South, Lethbridge, on Friday, May 3, 2013 at 12:00 P.M. (everyone to meet at the main entrance by the Eternal Flame by 11:45 A.M.). After the Graveside Service, a reception will be held at CORNERSTONE FUNERAL HOME, 2800 – Mayor Magrath Drive South, Lethbridge.
Honoured to Serve
Cornerstone Funeral Home & Crematorium
2800 Mayor Magrath Drive South
Lethbridge, Alberta T1K 7B1
Telephone ~ (403) 381-7777
Fax ~ (403) 381-3128
Toll Free ~ 1-(888)-381-7778
care@cornerstonefh.ca

No Condolences for “PENNINGTON Norman”