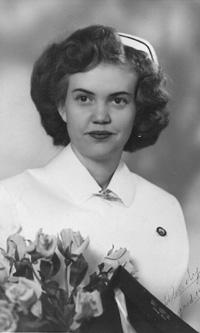 Vivian (Wendy) Madeline
March 25 1928 – April 28 2013
It is with great sadness that we announce the peaceful passing of our Mother, Vivian (Wendy), in her 85th year. She was predeceased by her beloved husband Bill in 2007. Also by her parents Ross and Agnes Wendelboe, her sisters Ruth (Isaac) and Josephine (Grigor), and nephews Dale Isaac, and Sydney Wendelboe.
She will be greatly missed by, and is survived by her son James (Nadia) Theilman, and her daughter Joann (Romeo) Strasbourg and grandsons Aaron and Austin. Sister Laura (Stevens) of High River, brother Maurice (Frieda) Wendelboe, of Lethbridge, and many nephews, neighbours and friends.
Mom was born at the farm in Barons Alberta. She went to school at Barrhill school district. Wendy (as she was known by her friends and family) graduated from the Galt School of Nursing in Lethbridge Alberta in 1950. She met the love of her life at a ball game. She married Bill in 1954, and moved to Calgary where they lived and raised their family till early retirement. Then they moved to Victoria and enjoyed, fishing, shrimping, crabbing, quilting, a good thrift store, flowers, and travel.
Mom was kind at heart, and a gentle soul. Even though a stroke disturbed her speech a little, a favorite saying of her was; ”well, I just don’t know”.
There will be no service by Vivian’s request.
In lieu of flowers, donations can be made in Vivian’s name to the local Saanich (Peninsula) Stroke Recovery Branch. 250-652-3016

No Condolences for “THEILMAN Vivian”