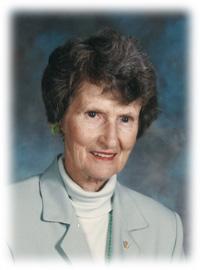 MARGARET BODELL of Lethbridge, beloved wife of the late George Carey Bodell, passed away in her sleep on April 7, 2013 at the Edith Cavell Nursing Centre, at the age of 93 years.
Margaret was born on August 20, 1919 to Charles and Annie Oates in Sheffield, England. In 1923 they made their home in Regina. In 1942, the family moved to Lethbridge where she has lived until her passing.
In 1943 Margaret worked at Leo Singer Men’s & Boys’ Wear for a short time and later worked at Hoyt Hardware. Most of the years were spent working at Eatons.
Margaret was active in church work through the years. She joined the First United Church Choir in 1943 and continued there until the River of Life Church was formed in 1988 and spent many years there as a member.
She spent many years as a caregiver to her mother until her passing in 1987. In 1987 she joined the Golden Mile Singers and sang with them until January of this year. She was also active in the Ladies Auxiliary of the Lethbridge Symphony Association.
Margaret was predeceased by her parents, three sisters; Dorothy, Barbara and Elaine, and one brother Gerald. Survivors include her brother Don and her sister Brenda.
A Memorial Service will be held in THE RIVER OF LIFE COMMUNITY CHURCH, 2820 – 18th Ave. North, Lethbridge, AB. at 2:00 P.M. with Rev. Bill Calderwood Officiating.
Honoured to Serve
Cornerstone Funeral Home & Crematorium
2800 Mayor Magrath Drive South
Lethbridge, Alberta T1K 7B1
Telephone ~ (403) 381-7777
Fax ~ (403) 381-3128
Toll Free ~ 1-(888)-381-7778
care@cornerstonefh.ca

No Condolences for “BODELL Margaret”