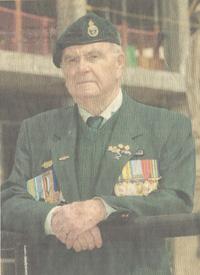 1930 – 2013
On Tuesday, May 14, 2013 Douglas Roy McNeely passed away at the age of 83 years. Doug was born on May 5, 1930 in Lethbridge, Alberta.
Over his life time he has lived from one coast of Canada to the other. During 1950 to 51 he served in Korea with the D company, 2nd Battalion, Princess Patricia’s Canadian Light Infantry. After that he served with the Royal Canadian Airforce/Canadian Armed Forces until 1969. He was an inspector for Alberta Occupational Health and Safety until his retirement in June of 1994. After his retirement he and his wife travelled extensively in Europe and North America. He was active in the Korean Veteran Association serving as secretary-treasurer for Unit #67 Bighorn for 21 years. He is survived by: his
wife Angelina (Angie); sons David (Cindy), Philip (Anne), Michael (Heidi), Paul; seventeen grandchildren; twelve great grand-children; and sister Shirley-Mae Crossen. He was predeceased by his mother Lettice (Lettey), his father Roy and his sister Maxine. A Prayer Service will be held at St. Mary’s Catholic Church on Friday, May 17 at 7:00 p.m. Funeral Mass will be celebrated at St. Mary’s Catholic Church, 6 McMillan Avenue, Red Deer on Saturday, May 18, 2013 at 1:00 p.m. Interment will be held in Mountain View Cemetery, Lethbridge, Alberta on Sunday, May 19, 2013 at 1:00 p.m. In lieu of flowers donations may be made to a charity of ones choice. Condolences may be sent or viewed at www.parklandfuneralhome.com. Arrangements in care Gordon R. Mathers, Funeral Director at Parkland Funeral Home and Crematorium, 6287 – 67 A Street (Taylor Drive), Red Deer. 403.340.4040

No Condolences for “MCNEELY Douglas”