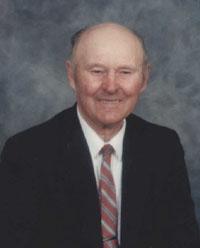 MORGAN GWYLMN BERRY passed away peacefully on May 26, 2013 in Cardston, Alberta at 87 years of age.
He is survived by his children, Bruce Weaver, Brian (Cheryl) Weaver, Sharon (Kevin) Spencer, Derek (Jillian) Berry, Doug Berry, Sandra (Michael) Oliver, Dave (Vimmy) Berry, Sheila (Lorin) Hudson, and John (Char) Berry; his brother Myron Berry; 30 grandchildren and 9 great-grandchildren.
He was predeceased by his wife, Marjorie; his parents, Thomas Berry and Jane Lowther Berry; brothers Mark and William Berry; sisters Betty Vair and Edythe Tiefenbach; and his grandson Coleman Hudson.
Morgan was born June 18, 1925 at Cardston, Alberta. His youth was spent roaming the foothills of his father’s ranch. He went to school in the Dolan school district prior to attending school in Aetna. Eventually, he bought the family ranch and pursued his love of farming and ranching. He took great pride in raising his livestock, especially his palomino colt Tony. He was very involved with the youth of his church through scouting, sports, fund-raising and the Sunday School. He had an infectious sense of humor, boundless patience and a huge heart; he was always willing to lend a helping hand to a friend or stranger in need. He was an amazing husband, father, grandfather, son, brother, uncle, and friend.
Friends may meet the family at Legacy Funeral Home ONLY on Thursday, May 30th from 7:00 to 8:00 p.m.
The Funeral Service will be held at The Church of Jesus Christ of Latter-day Saints, South Hill Chapel on Friday, May 31st, 2013 at 1:00 p.m. with Bishop Mark Heggie officiating.
Interment in the Cardston Cemetery. In memory of Morgan, donations may be made to the Canadian Cancer Society, 317 – 10th Street South, Lethbridge, Ab. T1J 2M7. Email your condolences to: legacyfh@telus.net
Legacy Funeral Homes Ltd.
P.O. Box 208
Cardston, Alberta T0K 0K0
Phone (403) 653-3222
Fax (403) 653-3677
legacyfh@telus.net

No Condolences for “BERRY Morgan”