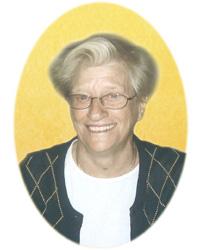 CHRISTIAN ANNAND MORRICE, beloved wife of the late Charles Morrice, passed away at the Edith Cavell Care Centre on May 28th, 2013.
She is survived by her children, Rod (Ursula) and Ian (Elizabeth), grandchildren, Chelsey, Kara (Kirk), Kyle, Courtney (Nate) and Andrew, great-grandchildren, Lucy, Maggie and Molly, and brother, Henry Rennie. Her nieces and nephews also held a special place in her heart.
Chris was born on January 11th, 1927 in Aberdeen, Scotland and married Charles Morrice on June 9th, 1948. Along with her husband and young son, Chris moved to Canada to start a new life in 1954. In true Scottish form she often said “every penny is a prisoner” but that certainly paid off as she and Charles were able to take numerous cruises and trips to Las Vegas while often spending winters in Kauai and summers at the cottage at Rosen Lake.
Chris enjoyed bowling, curling, golfing at Henderson Lake and the camaraderie that came with those activities. She was known for her quick wit and was able to crack a joke even in the toughest of times. Her strength was remarkable.
The family of Chris Morrice would like to thank the staff at Martha’s House, Edith Cavell and the emergency room doctors and nurses at the Lethbridge Regional Hospital for the special care and attention they gave Chris over the years.
In respect of her wishes, Chris’ memorial will be an intimate family gathering.
Honoured to Serve
Cornerstone Funeral Home & Crematorium
2800 Mayor Magrath Drive South
Lethbridge, Alberta T1K 7B1
Telephone ~ (403) 381-7777
Fax ~ (403) 381-3128
Toll Free ~ 1-(888)-381-7778
care@cornerstonefh.ca

No Condolences for “MORRICE Christian”