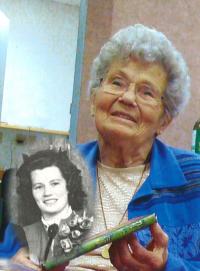 1923 ~ 2013
Verna Marjorie Westling of Lethbridge, beloved wife of Eldon Westling, passed away after a lengthy illness on Friday, May 31, 2013 at the age of 89 years.
Verna was born in Khedive, Saskatchewan on November 4, 1923 to Jesse and Florence Young. Verna was raised and schooled in the area then attended business school in Regina. Following business school she worked as a receptionist at the hospital in Weyburn, Saskatchewan.
She met and fell in love with a true gentleman, Eldon Westling. They were married on March 15, 1946. They lived in Weyburn for two years then moved to Cranbrook, BC where they lived for eleven years before moving to Lethbridge in 1959.
Verna, like her mother, played piano by ear. She did some art work in her younger years (a talent that only her sons inherited). After moving to Lethbridge, she took up 5 pin bowling for several years.
Her true love in life was being a wife and mother. While her family was growing up she was very often “Gramma” to a lot of other children! Being across the street from a school in Lethbridge she was frequently “volunteered” to help with the baking skills of students and Brownie Groups and she loved every minute of it!
She belonged to the Legion Ladies Auxiliary and the Lethbridge Senior Citizen’s Organization.
Besides her loving husband Eldon, Verna is survived by her two daughters Sandra Hunt and Janyce Sudo (David); her three sons Ron (Lillian) Westling, Murray (Gale) Westling, and Greg (Monica) Westling; several grandchildren and great-grandchildren; her siblings Gertrude Jones and Paul Young.
Verna was predeceased by her parents Jesse and Florence Young; her brothers Raymond, John, David and Gordon; her sisters Gladys, Ruby and Nellie; her son David Jon; and her son-in-law Donald Eldon Hunt.
A Memorial Service will be held at 11:00am on Saturday, June 8, 2013 at McKILLOP UNITED CHURCH | 2329 15 Avenue South, Lethbridge with Reverend Trevor Potter officiating.
In lieu of flowers, please consider a donation to the Auxiliary to Extendicare Fairmont Park | 115 Fairmont Blvd South, Lethbridge, AB T1K 5V2 or the Parkinson’s Society of Southern Alberta | 1254 3 Avenue S. Lethbridge, AB T1J 0J9.
Send condolences at www.mbfunerals.com.
Martin Bros. Funeral Chapels Ltd.
610 – 4 Street South
Lethbridge, AB T1J 4P3
Phone: (403)328-2361 Fax: (403)382-3623
Toll Free: 1-800-382-2901
www.mbfunerals.com

No Condolences for “WESTLING Verna”