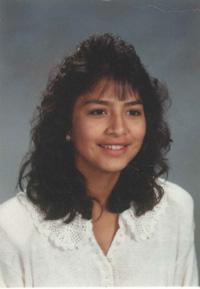 STEFANIE ‘BRANDI’ STANDING ALONE “ Otah Koipo’ taki” (Yellow Flying Woman) was the loving daughter of Santanita Manychief and the late John Manychief Jr. and began her spirit journey on June 3, 2013 after a courageous battle with a lengthy illness.
She was the cherished older sister of Sheryl (‘Sherri’) Manychief, mother to son Dylan Standing Alone and special friend to Tony Many Fingers.
She was born in Albuquerque, New Mexico on March 26, 1971. Besides her mother, sister and son, she is survived by uncle Tony Martinez, aunties Mae (Pete) Tallow, Teresa (Ken) Scout, God Parents Carolyn and Joe Mondragon and numerous special cousins and relatives. She is also survived by God Child Tia Lynn Daniels.
She was predeceased by her grandparents John (Sr.) and Mary Manychief, Patricio and Anita B. Romero, her father John Manychief Jr. and her sister Sonya (‘Candi’). As a daughter, sister and mom, Brandi was dedicated to the wellbeing of her family and ensured they knew how much she loved them. She grew up with strong traditional ways and teachings and was tremendously proud of her heritage attending Sundances and ceremonies whenever possible.
Her mother and father instilled in her the value of a balanced life: intellectually, spiritually, emotionally and physically. She attended school at Standoff Elementary, Bernallio, N.M., Los Lunas Elementary, Albuquerque, N.M., Taos Day School, Taos Pueblo, N.M., Glenhill High in Glenwood, Ab., Lorne Akins Jr. High, St. Albert, Ab., St. Mary’s High School, Blood Reserve, LCI and Lethbridge Community College in Lethbridge, Ab., where she studied Environmental Science. She worked as a firefighter with Alberta Forestry and Wild Land Firefighters, as well as the Pine Beetle project with the Alberta Government. She also worked as a Teacher’s Assistant at Cardston and Saipoiyi Elementary Schools and worked with the Blood Tribe Administration in Public Relations. She also spent many hours helping Tony at his Radio Station – 89.9.
Through her difficult times she remained elegant and poised and was strong emotionally for herself and her family. Brandi had an adventurous spirit. She, Dylan and Tony, loved boating, jet skiing, fishing, motor biking, cooking, attending concerts and festivals. She was very involved with her son Dylan in his Extreme Mountain Biking. She loved animals, especially horses. She will be greatly missed by all of the people whose lives she touched.
A Wake Service will be held at the Gladstone Hall, Blood Reserve on Monday, June 10th, 2013 from 7:00 – 11:00 p.m. The Funeral Service will also be held at the Gladstone Hall on Tuesday, June 11th at 11:00 a.m. with Margaret Water Chief officiating. Interment at the Blood Band Cemetery. 
Legacy Funeral Homes Ltd.
P.O. Box 208
Cardston, Alberta T0K 0K0
Phone (403) 653-3222
Fax (403) 653-3677
legacyfh@telus.net