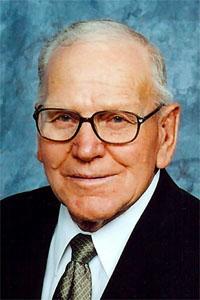 JAMES HENRY TANNER JR. passed away peacefully Friday, September 20, 2013 at the age of 95 in Cardston, Alberta. He was predeceased by his beloved wife, Hazel Belle Nielsen Tanner, his parents, 10 siblings and 2 great grandchildren. He is survived by his brother Dean Tanner, his children, Phyllis (Dale) Evanson, Jim (Becky), Linda (Ron) Layton, Karen (Dave) Armstrong, Lester (Brenda), Don (Shawna), Ken (Sheila), 29 grandchildren, 63 great grandchildren and 4 great great grandchildren. Jim was born in Aetna, Alberta, on September 29, 1917 to James Henry and Violet Hansen Tanner. He grew up on the farm in Taylorville. At the age of 20 he moved to Barnwell to find work on a farm. There he met and married “Hazel Belle” in the Cardston Alberta Temple on November 22, 1939. They made their home in Barnwell and lived there until Jim’s health began to deteriorate. In 2006 they moved to Cardston. To Jim, farming was not only a livelihood but a way of life. He farmed for about 65 years, growing mostly wheat, sugar beets and his famous Tanner corn. Jim was an active member of The Church of Jesus Christ of Latter-day Saints. His church service included scoutmaster, councilor and Bishop in the Barnwell Ward, councilor in the Taber Stake Presidency, member of the Stake High Council, Missionary to the Salt Lake City Family History Center, and teacher. He served many years as an Ordinance Worker and a Sealer in the Cardston Alberta Temple. Jim was always willing to lend a helping hand, his expertise and advice. Some of his community service included Flatlands District Scout Commissioner, Chairman of the Alberta Vegetable Marketing Board and President of the Barnwell 55 Club.
Over the years Jim has enjoyed playing softball, water skiing, playing his saxophone and harmonica, and writing poetry. The Jim and Hazel Tanner home was always open to family and friends. Jim will be greatly missed by those who have known and loved him.
The Funeral Service will be held in The Church of Jesus Christ of Latter-day Saints, Barnwell Chapel, Barnwell, AB on Saturday, September 28th, 2013 at 11:00 a.m.
Friends may meet the family at Legacy Funeral Home, Cardston on Friday, September 27th, 2013 from 11:00 a.m. to 12:30 p.m. Friends may also meet the family at The Church of Jesus Christ of Latter-day Saints, Barnwell Chapel, Barnwell, AB on Friday, September 27th, 2013 from 6:00 p.m. to 7:00 p.m. or Saturday September 28th, 2013 from 9:45 a.m. to 10:45 a.m. prior to the Service. Interment in the Barnwell Cemetery, Barnwell, Alberta. E-mail your condolences to: legacyfh@telus.net. Arrangements entrusted to Berry Gorham.
Legacy Funeral Homes Ltd.
P.O. Box 208
Cardston, Alberta T0K 0K0
Phone (403) 653-3222
Fax (403) 653-3677
legacyfh@telus.net

No Condolences for “TANNER James”