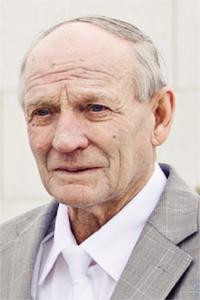 1932 – 2013
Roy Earl Haynes, beloved husband of Carolee Haynes, passed away in Taber on Wednesday, October 2, 2013 at the age of 80 years. Relatives and friends are invited to meet with the family at Southland Funeral Chapel, 5006 – 48 Avenue, Taber on Monday, October 7, 2013 between 7:00 P.M. and 8:00 P.M. and also at the church prior to the funeral service on Tuesday, October 8, 2013 between 1:00 P.M. and 1:40 P.M. The Funeral Service will be held at The Church of Jesus Christ of Latter-day Saints, Taber Stake Centre, 4709 – 50 Avenue, Taber on Tuesday, October 8, 2013 at 2:00 P.M. with Bishop Brock Campbell conducting. Burial to follow at the Taber Memorial Garden. Condolences may be forwarded by visiting our website at www.southlandfuneral.com. Besides his loving wife Carolee, Roy is survived by their children Brenda (Bud) Mickelberry of Taber, Sheldon (Tracie) Haynes of Taber, Denise (Rod) Yokoyama of Taber, Arlene (John) Geeraert of Taber, Leonard (Kelly) Haynes of Taber and Monica Haynes (Arden Row) of Taber; seventeen grandchildren and five great grandchildren. He is also survived by his step mother Doris Haynes; brother Tim (Deanne) Haynes of Cardston; his sisters Margaret (Walter) Langmuir of Creston, British Columbia, Doris (Ross) Gulkison of Vancouver, British Columbia, Cindy (Roman) Batorski of Barnwell and by numerous nieces and nephews. He was predeceased by his parents Percy and Lafern Haynes; step-father Jean Radway; brother Julian Haynes; sister-in-law Joyce Reeves and by his Grandson Chris Yokoyama. Roy was born in Taber on October 23, 1932 to Percy and Lafern Haynes. In 1952, Roy moved to Enchant with his mother and brother Tim. He met Carolee Birch in 1957 and they were married on October 29, 1958. A year later, they were sealed in the Cardston Temple. In 1962 they moved to the “Twinkle Inn” on the church farm in Taber. Roy, Percy and other church members built their home on the farm in 1971 and it was there they raised their six children. Roy loved the farm. His favorite things were sugar beets and John Deere equipment. He was active in The Church of Jesus Christ of Latter-day Saints and served as the ward clerk for many years in the old Taber Third Ward. Roy and Carolee retired from farming and moved into Taber in 2012. If friends so desire, memorial tributes in Roy’s name may be made directly to the Taber Hospital Foundation, 4326 – 50 Avenue, Taber, Alberta T1G 1N9. Arrangements in care of Southland Funeral Chapel, Taber. Telephone: (403) 223-8778.