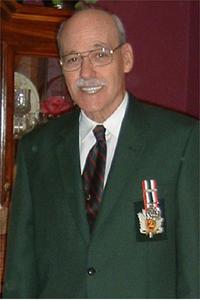 1932 ~ 2013
Mr. William “Jim” Munro, beloved husband of Mrs. Ida Munro, passed away on Thursday, December 5, 2013 at the age of 81 years. Jim was born and raised in Toronto, ON. He joined the Queen’s Own Rifles of Canada in 1951 and was part of the Nato peacekeeping forces in Germany. After his discharge from the military in 1960, he worked in various positions starting with being a constable in the Camrose Police Force for 10 years. This was followed by Director of Preventive Social Services in Wetaskiwin, Camp Manager of Camp He Ho Ha for the Handicapped at Lake Isle, AB, and Claims Investigator for WCB in Edmonton. He was a long time member of the Royal Canadian Legion. Jim and Ida moved to Lethbridge in 2000 where he carried on with his woodworking hobby building arbors, benches, and swings. He was an avid garage sale shopper who loved looking for bargains. Jim was a generous man with a unique sense of humor who enjoyed company and would welcome anyone into his home. He is survived by his wife Ida, sons Barry and Guy Munro of Edmonton, four grandchildren Cody and Chad Munro of Calgary, Breanna and Julia Cavanagh of Sherwood Park, brothers Richard and Robert Munro of Toronto, sisters Dorothea Harkin of Aurora, ON, Mary (Frank) Auffrey of Westmorland, NB, Brenda (Ken) Brown of Owen Sound, ON, and Sharon Laughlin of Barrie, ON, sister-in-law Sharon Munro of Churchbridge, SK as well as numerous nieces, nephews and extended family members. Jim was predeceased by his parents William and Dorothy Munro of Toronto, brother John (Jack) Munro of Churchbridge, SK, and brother-in-law Tony Harkin of Toronto. A Memorial Service will be held at 11:00am on Tuesday, December 10, 2013 at MARTIN BROTHERS RIVERVIEW CHAPEL, 610 4th Street South, Lethbridge with Reverend Terry Shillington officiating. An interment will be held at the Mountain View Cemetery. In lieu of flowers, memorial donations may be made to the Chinook Regional Hospital Foundation, 960 19 Street South, Lethbridge, AB T1J 1W5. Send condolences at www.mbfunerals.com.

No Condolences for “MUNRO William”