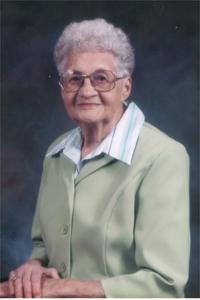 1921 ~ 2013
Annetta Mary Allen of Lethbridge, beloved wife of the late David Allen, passed away peacefully on Sunday, December 15, 2013 at the age of 92 years. Annetta was born in Brandon, Manitoba. At six months old she moved to Lethbridge where she lived with her parents Robert and Cora Russell and her sister Dorothy. She attended Central School and L.C.I. In 1942, she married the love of her life David Allen and together they raised their family in Lethbridge. In 1967, she started working as a school secretary, first at George McKillop School and then at Agnus Davison School where she retired 1986. In her retirement years she enjoyed raising canaries and helping Dave with his pigeons. She also enjoyed spoiling her grandchildren and her cats. Annetta is survived by her daughter Kerry (Pat) Middleton; her sons Terry Allen, Dennis (Dee) Allen, David Allen and Tom Allen; her 9 grandchildren and 6 great-grandchildren; as well as nieces, nephews and their families. Besides her loving husband David, Annetta was predeceased by her parents Robert and Cora Russell. A private family graveside service will be held at Mountain View Cemetery with a Celebration of Life to be announced at a later date. Send condolences at www.mbfunerals.com.

No Condolences for “ALLEN Annetta”