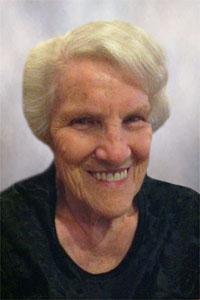 (nee Baranyi)
1926 – 2014
Mary Vujicic passed away at the Chinook Regional Hospital on Friday, December 6, 2013 at the age of 87 years after a very brief illness. Mary is survived by daughters Rose Schaafsma (Sjoerd), Paula Dick (Graham) of Lethbridge; grandson Benjamin Dick of Calgary, sister Priscilla Brady (Glen) of BC, and many nieces and nephews. Mary was predeceased by her parents, brothers Karl Baranyi (Wendy), Les Baranyi, sisters Julia Smolnicky (Les), Rose Nagy (Frank). Mary was born December 4, 1926 in Tard, Hungary. In 1930, Mary came to Canada with her mother Rozsalia Baranyi to join her father Kalman Baranyi in Raymond, Alberta. After leaving the farm, she worked at the Galt hospital, various waitress jobs, and Automatic Electric. In 1968 Mary was one of the first people hired when the Woolco store opened in Lethbridge. She spent the next 25 years working there in almost all departments. She retired to spend time with her family and friends and her many hobbies and interests. A Visitation will be held at CORNERSTONE FUNERAL HOME, 2800 Mayor Magrath Drive South, Lethbridge on Friday, December 13, 2013 from 3:00 – 5:00 P.M. A Memorial Service will be held at KINGDOM HALL OF THE JEHOVAH’S WITNESSES, 1510 Stafford Drive North, Lethbridge on Saturday, December 14, 2013 at 1:00 P.M. with Mr. Bill Lang officiating. Following the Memorial Service an interment will be held a Mountain View Cemetery. A Reception will be held following the Graveside Service and those that would like to attend may join at Cornerstone Funeral Home at 2:30 P.M. Flowers respectfully declined. In lieu of flowers, donations may be made to the Watchtower Bible and Tract Society, 13893 Ontario 7, Georgetown, ON, L7G 4S4 or the Alberta Cancer Foundation, 960 – 19 Street South, Lethbridge, AB, T1J 1W5