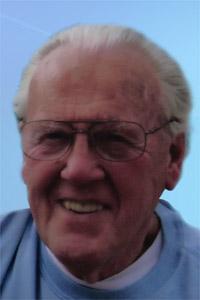 “Then Sings My Soul”
Gerald A. (Jerry) Rogers II,beloved husband of Lily Rogers of Lethbridge, passed away peacefully at the Chinook Regional Hospital after a sudden, brief illness on Thursday, December 19th, 2013 at the age of 81 years. He leaves his five children and their families: Catherine and Lorne Marco and their children Sarah (Kevin, and their children Zoe and Cacia), Kyle (Amy) and Elise (Tyler, and their children Siren, Niya, and Trey); Dianne and Bruce Johnston and their children Brett (Julie, and their son Hamish), Bryce, and Orye; Gerald and Joan Rogers and their son Gerald; Kenneth and Christine Rogers and their children Christopher and Camille; and Margaret and Neil James and their children Riley and Kaylee. He is also lovingly remembered by his sister Jocelyn Pritchard of Vancouver B.C., and her five children and their families, and his brothers-in-law Paul Pedersen (Carol) of Camrose, and Dennis Pedersen (Donna) of Wetaskiwin and their two children and their families. He was pre-deceased by his parents The Reverend Dr. Gerald F. Rogers and Margaret Rogers, his sister Daphne Rogers, his brother-in-law Blake Pritchard, and his father and mother-in-law Bernard and Edith Pedersen of Camrose. Numbers 6:24-26: “The Lord bless thee, and keep thee; the Lord make his face shine upon thee, and be gracious unto thee; the Lord lift up his countenance upon thee, and give thee peace.” Jerry was born on July 19, 1932 in Yarmouth, Nova Scotia. He was a proud Bluenose. In 1947, when Jerry was 15, his family moved from Halifax to Edmonton, Alberta. He loved his memories of his years in Edmonton while in high school and as a young adult. Jerry and Lily’s life together began in Camrose sixty years ago. As a young couple with a growing family, Jerry and Lily made many good friends in Camrose, Wainwright, and Lethbridge, where they settled in 1972. With a background in lumberyard management, Jerry joined the City of Lethbridge Assessment Department, and enjoyed his work there until his retirement in 1997. In his retirement, Jerry enjoyed travels with Lily, and extra time with his children, grandchildren, and great-grandchildren. He was an active lifelong member of The United Church, and his deep-rooted love for music and singing was expressed through more than 60 years of continuous membership in church choirs. Jerry and Lily were founding members of the Lethbridge Alzheimer’s Society, to which they devoted many volunteer hours. Jerry lived his life with integrity and honour, supporting his family with love, strength and confidence. Jerry’s family is grateful to the staff at CRH Intensive Care Unit for their loving care. A Celebration of Jerry’s life will be held at MCKILLOP UNITED CHURCH, 2329 15th Avenue South, Lethbridge, AB., on Friday, December 27th, 2013, at 7:00 p.m. with The Reverend Trevor Potter officiating.

No Condolences for “ROGERS Gerald”