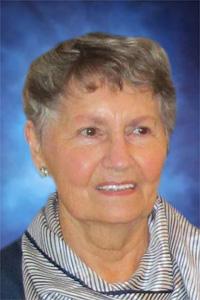 GRACE CLAUDETTE TUCKER nee Traxler, passed away peacefully surrounded by her loving family at the St. Michael’s Palliative Care Unit on Sunday, January 12, 2014. This very special lady so appropriately named Grace was born in Medicine Hat on October 6, 1932, to Claud and Faith Traxler of Etzikom. Being the eldest of six siblings, Grace had many responsibilities growing up, caring for and helping to raise her family, a role she continued until her passing. Her life started on the family farm outside of Etzikom where she attended school until grade nine, then moved to Foremost where she worked for room and board in order to attend and complete high school. While working at Brower’s store in Etzikom, a young cowboy named Lamarr (Lee) came in for supplies, and that was the beginning of a life together. Grace and Lee were married in 1953 in Calgary where they both worked until moving to the King Ranch, west of High River. Grace was a housekeeper, cook and gardener while Lee worked as a ranch hand. Lee’s new occupation with the Alberta Wheat Pool had them living in several great communities over the years, where many wonderful friendships began, especially two very special families, the Montgomery’s and Herriman’s. Grace clerked at Yeoman’s grocery store in Blackie, then became a teacher’s aid in Blackie and Lethbridge, until starting a career with Eaton’s, from 1974 to 1999. Grace loved with passion her family, friends, gardening, books, travel and candy. Grace is survived by her children Timothy (Alison) Tucker, Starr (Rick) Davies, Tam Tucker (Mike Calvert). Grandchildren Laura (Steve) Heptonstall, Angela Melanson, and Taylor (Rosalie) Davies. Great-grandchildren Isla, Jaci, Kamryn and Leigha. Her siblings Bill (Doris) Traxler, Cliff (Barb) Traxler, Grant (Marie) Traxler, Marie Brown, Elaine (Doug) Mueller and brother-in-law Len Halvorson. Grace also has many nieces and nephews that were very good friends to her. She always enjoyed young people. She was predeceased by her parents, husband Lee and sisters Ruth and Claudia. A Celebration of Life will be held at McKILLOP UNITED CHURCH, 2329 – 15 Avenue South, Lethbridge on Saturday, January 25, 2014 at 1:00 P.M. with Reverend Terry Shillington officiating. Donations in Grace’s memory may be made to St. Michael’s Palliative Care Centre, 1400 – 9 Avenue South, Lethbridge, AB, T1J 4V5.

No Condolences for “TUCKER Grace”