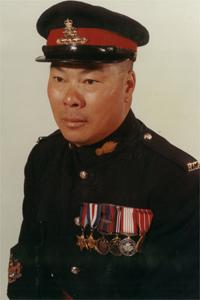 1924 ~ 2014
Mr. Dot Men “Jack” Lee of Lethbridge, beloved husband of Helen Lee, passed away on Thursday, January 16, 2014 at the age of 89 years. Jack was born on March 31, 1924. At the age of 4, Jack moved to China for Chinese education and returned to Canada at age 15 to work in the family dry cleaning business. When Jack turned 18, he enlisted into the Canadian army; after basic training he was sent to England. From there he was sent to Europe where he joined up with the South Saskatchewan Regiment; that took him through Belgium, Holland, and Germany. After the war, Jack came home and did guard duty at the POW camp in Lethbridge for 6 months. Jack then met Helen and they were married on January 30, 1949 and they had 3 sons. Jack then had a wonderful opportunity to do skin diving in Cozumel, Micronesia, Hong Kong, and places too numerous to mention. Jack was an avid sportsman- he played racquetball, tennis, ping-pong, golf, weight-lifting, etc. For many years he volunteered at the Senior Centre doing different things and also was a Tai Chi instructor. In 1951, he joined the Militia (engineers), then over to the artillery shortly after. He then began teaching young soldiers and he gained the rank of WOI (RSM) when he retired. In 1979, he was called out of retirement and was posted to camp Shilo, Brandon, MB. for a few months in the summer. That was his last posting and then he was “officially” retired. Jack was a member of the Chinese Cultural Society as well as the K-Ying Po. He was always busy and loved his garden flowers, grapes and especially his Goji plants and his every day activity in the summer was golfing for the past 30 years. He achieved his greatest wish which was to attend his granddaughter’s wedding this past November in Toronto. We thank God for the blessing. Besides his loving wife Helen, Jack is survived by his sons Ricky (Floss) of Calgary, Terry Lee of Lethbridge and Corey Lee of Sherwood Park; grandchildren Nicole (Patrick) Moyer of Toronto, Christie (Jeremy) Froese of Winnipeg, Lucas Lee and Aiden Lee both of Sherwood Park; great- grandchildren Jack Froese and Peter Froese of Winnipeg; sister Margaret Mah of Red Deer; brother Harvey (Ruth) Lee of Lethbridge; as well as numerous nieces, nephews, and their families. Jack was predeceased by his parents Duck Lee and Yet Soon; his brother Jim and sisters Jean and Betty. A Funeral Service will be held at 11:00am on Wednesday, January 22, 2014 at MARTIN BROTHERS RIVERVIEW CHAPEL, 610 4th Street South, Lethbridge with Mr. John Chan officiating. Flowers are gratefully declined. Those who wish, memorial donations may be made to the Heart and Stroke Foundation, Box 2211 Lethbridge, AB T1J 4K7 or the Cancer Research Society, 305 200 Isabella Street, Ottawa, ON K1S 1V7 or the Chinook Regional Hospital Foundation, 960 19th Street South, Lethbridge, AB T1J 1W5. Send condolences at www.mbfunerals.com.

No Condolences for “LEE Dot Men”