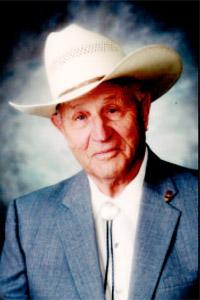 February 28, 1912 – January 23, 2014
It is with great sadness that we mark the passing of Theodore Mynott Allen Jr. He spent a remarkable 101 years on this earth. He was predeceased by his loving wife Esther and their son Richard. A private family service will be held with burial at the Taber Memorial Garden. Condolences may be forwarded by visiting our website at www.southlandfuneral.com. Ted will be fondly remembered by his son Theodore III (Holly) Allen of Calgary and daughter Linda (Arthur) Olivier of Taber as well as seven grandchildren, nine great grandchildren and numerous relatives and friends. Ted began life in Colfax, Washington, the fourth of five children born to Theodore and Linnie Allen. The family, including sisters Irene Schonert, Gladys "Polly" Voorhees, Argyle Voorhees and brother Bill (Anne) moved to the Taber area in 1918 to farm on the north bank of Chin Coulee. As a young man, Ted wrangled horses from Skiff to Warner to Lomond. In those days there were no fences. Farmers turned their horses loose during the winter and trailed them back in the spring. Ted and Esther met at a country dance held at the Wadena School south of Taber. She had just been hired as a teacher at Cromwell School south of Taber, and they spent the next sixty six years together. During his lifetime, he was a farmer, a horseman, a hockey coach and a lifetime member of the Lions Club. Besides farming, Ted also raised and sold kids’ ponies. He took great joy in providing a fledgling horse enthusiast with a reliable equine companion. When there got to be over one hundred horses out on the coulee, cutting down seemed to be a good idea. Many of Ted’s hockey players will remember him as a coach who didn’t skate. He coached from the bench following drills published in the Saturday supplement of the Lethbridge Herald. One of his teams reached Provincial Finals. Not bad for small town Alberta. Ted, his brother Bill and a few of their friends were instrumental in founding the Taber Lions Club. He was especially proud of his association with that organization and their affiliation with the CNIB. In later years his contribution of "a joke a meeting" became mandatory. He has been awarded the coveted Melvin Jones award for his contributions and last year was recognized for being the oldest living member of the Lions Club in the world. Thoroughbred horses and horse racing became a passion later on in his life. He owned and raced horses with a number of partners over the years and supported the industry until his death. Dad’s philosophy of life was that you should leave the planet a better place for your having been on it. You done good, Dad. If friends so desire, memorial tributes in Ted’s name may be made directly to charitable cause of one’s personal choosing. Arrangements in care of Southland Funeral Chapel, Taber. Telephone: (403) 223-8778.