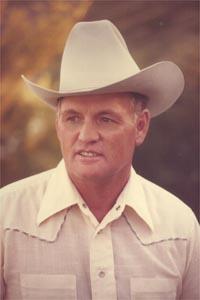 MONTE DUANE COX, passed away at the Chinook Regional Hospital on Saturday, January 25, 2014 at the age of 82 years. Monte was born in Raymond July 6, 1931. The family resided in Welling. Monte’s passion in life started at the age of 14. He then went back to work at the Stringham Ranch and various other leases riding and braking horses in Southern Alberta. He earned extra money breaking horses for the neighbours. His horse career earned him titles in saddle bronc, calf roping, Appaloosa International Show and team roping. Monte was the president of the SARRC from 65-76, Fort Whoop Up Club in 57, Fort Macleod Club in 58, Claresholm Club 79-89 and a director of the Appaloosa Horse Club of Canada from 60-63. He founded the Innisfail Roping Club in 63 and Edmonton Roping Club in 72. Monte loved to ride in the mountains and spent many days riding in the gap and hunting in the flat. Monte and his brother Blaine were in partnership and operated Chinook Propane in Pincher Creek for 5 years. He then went on to be a Provincial Gas Inspector for 25 years. Monte was also an Elder in the LDS Church. In 1951 Monte married Noreen Gillies, together they had 3 daughters Pam (Allan) Woods, Dana (Jim) Glanville and Kim Klassen. In 1981 Monte married Mary Patricia Allan-Cox and raised her daughter Carrie, who also took on this western culture and is married to horse trainer Brent Trout. Monte is survived by his daughters Pam (Allan) Woods, Dana (Jim) Glanville, Kim Klassen, Carrie (Brent) Trout; grandchildren Shea, Jimmi Lou, Irvine, Boggust, Cori Jo, Amy, Chancey, Autumn, Thomas; 8 great grandchildren; brothers Sheldon (Pat) Cox, Don (Hannah-deceased) Cox, Lee Cox; sisters Kathryn (Les) Delparte, Sharon Cox, Karen (Jim) Bagshaw, Gayle (Bill) Toth; sisters-in-law Connie Cox and Marlene Cox. Besides his late wife Mary, Monte was predeceased by his mother Zella, stepmother Genneal and father LeMond Cox, brothers Gary Cox, Blaine Cox, sister Marie Clark and grandson Clay Klassen. Friends may meet the family from 12:00 P.M. to 12:45 P.M. prior to the Funeral Service on Saturday, February 1, 2014 at 1:00 p.m. at The Church of Jesus Christ of Latter-day Saints, WELLING CHAPEL, with Brother Darren Wilde, officiating. Interment to follow in the Temple Hill Cemetery.