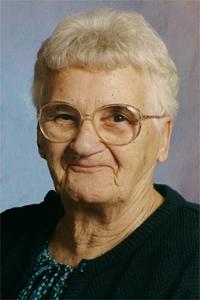 1921 ~ 2014
Margaret Blue of Coaldale, formerly of Carmangay, passed away February 3, 2014, just 6 days before her 93rd birthday. Margaret was born in Newfoundland, she and her son Bill moved west to Carmangay in 1958, where she met and married Orville Blue (deceased 2010). She worked for several years as a cook at the Carmangay Hospital. When she and Orville retired, they enjoyed fishing and camping around Alberta. Margaret is survived by her only child Bill (Marg) Doyle, as well as step-daughters Vivian Trechka, Valerie (Vern) Leavitt and Carol (Dennis Langworthy) Moman. She is also survived by 13 grandchildren and 14 great-grandchildren. A Funeral service will be held at 1:00pm, on Thursday February 6, 2014 at MARTIN BROTHERS RIVERVIEW CHAPEL, 610 4th Street South, Lethbridge. Interment to follow at Archmount Cemetery. Send condolences at www.mbfunerals.com.

No Condolences for “BLUE Margaret”