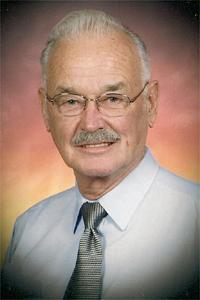 1926 ~ 2014
Albert John Kooy of Lethbridge, beloved husband of Alice (nee Pilon), passed away peacefully to be with Christ, his Rock, at the age of 87 years. Besides his loving wife of 63 years, Albert is survived by his children, Cheryl (Eugene) Boehr, Peter (Diane) Kooy, Doreen Kooy, Delbert (Lucy) Kooy, and Julie (Henry) Klok; 14 grandchildren; 10 great grandchildren. Albert is also survived by siblings Johanna Konynenbelt of Nobleford and Bertha (John) Hofman of Grand Rapids, Michigan. Albert was predeceased by his parents Peter and Jennie (nee Oldegbers); his sister Alice (Henry) Postman and brothers Peter and Ralph. Born and raised on the family farm near Nobleford, Albert successfully managed the homestead with his wife and children. Alice was the love of his life, and Albert was a dedicated family man who actively participated in his church and his community. He pursued life and work with curiosity and vigor. Family and friends are invited to a visitation that will be held from 7-8 p.m. on Thursday, February 6, 2014 at MARTIN BROTHERS RIVERVIEW CHAPEL, 610 4th Street South. A family interment will be held at the Monarch-Nobleford Cemetery at 11:30 a.m. on Friday, February 7, followed by a Celebration of Albert’s Life at 2:00 pm at MARANATHA CHRISTIAN REFORMED CHURCH, 260 McGill Blvd West, Lethbridge to which friends and acquaintances are welcome. In lieu of flowers, donations may be made to the Heart and Stroke Foundation, Box 2211, Lethbridge, Alberta T1J 4K7. Send condolences at www.mbfunerals.com.