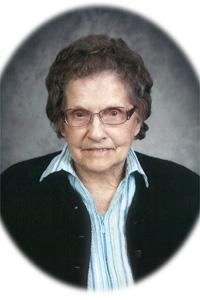 Beatrice Evelyn Dunn, beloved wife of Clio Benjamin Dunn (predeceased) of Lethbridge passed away at the St. Michael’s Heath Center on February 6, 2014 at the age of 94 years. She was the loving mother of D’Arcy Dunn (Gayle) of Summerland, BC, Kevin Dunn (Bonnie) of Coalhurst , AB. She is also survived by her 5 grandchildren: Ferda Bayazit, Jim Dunn, Jeff Dunn, Daryll Dunn and Diana Dunn-Kostiw (Lance); Her siblings Ellen Wright (Harry), Ron Nolan (Carla), Rita Pizzey (Larry) as well as countless nieces, nephews, cousins and friends. She was also predeceased by her infant daughter Faye Marguerite Dunn and her brothers Bernard (Bub) Nolan and Thomas (Tommy) Nolan. Beatrice was born on July 11, 1919 at her grandparents farm in Picture Butte. She attended school in Iron Springs, Picture Butte and graduated in Coaldale. She helped care for her younger siblings when she lost her mother in 1939 until she married Clio in 1941. The next 5 years were spent travelling with Clio during the war for basic training through Canada, and waiting for him to return from Europe in 1946. On his return they moved to Rolling Hills where they had their two boys and farmed for 26 years. They built and managed the Sunalta tent and trailer park until 1984 when they retired and spent many good years golfing and traveling. They moved to Lethbridge in 2000 where they met many friends at the River Ridge Community. Relatives and friends are invited to the memorial service which will be held at MCKILLOP UNITED CHURCH, 2329 15th Avenue South, Lethbridge, Alberta on Tuesday, February 11th at 11:00 A.M. with Reverend Trevor Potter officiating. Interment to follow. In lieu of gifts and flowers donations can be made to the Alzheimer Society of Alberta, #402 – 740 – 4th Avenue S. Lethbridge Alberta T1J 0N9. Many thanks from the family to the Staff of Columbia Assisted Living and St. Michael’s Heath Centre.

No Condolences for “DUNN Beatrice”